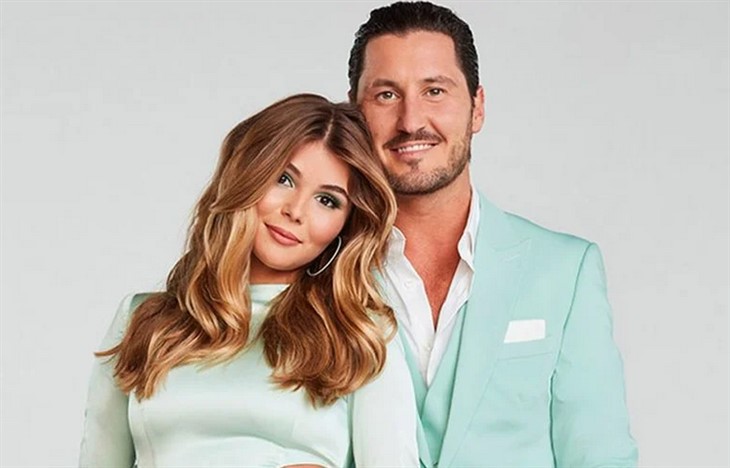 Dancing with the Stars Season 30 fans heard a rumor that Lori Loughlin’s daughter, Olivia Jade made a deal with ABC. Allegedly, they would not eliminate her for weeks into the show. Well, when someone repeated that information on Twitter, ABC’s Exec, Robert Mills flatly denied it. Of course, because of the College Admissions Scandal, a lot of people hate that Olivia ever got the chance at the Mirror Ball Trophy.

Over the years, ABC often brought in controversial people. Actually, many fans think that they do that for drama which pushes up the ratings. For example, in Season 29, fans saw them bring in Carol Baskin from Tiger King. Well, Olivia got a poor reception from a lot of people when her casting was announced. Of course, Fox News reminded fans about the scandal. They noted, “In August 2020, Loughlin and Mossimo Giannulli pleaded guilty to charges stemming from $500,000 payments to scam mastermind William “Rick” Singer.”

Dancing with the Stars fans later saw that Olivia chatted about her mom. Lori Loughlin might be loved by fans of When Calls the Heart, but not so much by DWTS fans. Olivia said that her mom is so excited for her. Well, others are not. In fact, Page Six sarcastically wrote, “just don’t ask her to fill out any paperwork for you!”  So, it’s understandable that critics hoped there was truth to the deal rumor.

Dancing With The Stars Spoilers – Origin Of The Deal Rumor

Heavy reported on the original rumor about the deal that Olivia Jade allegedly made with the ABC execs. Apparently, the allegation came via “Entertainment Lawyer, who operates anonymously, runs a blog called Crazy Days and Nights and a Twitter account @EntyLawyer.” He posted on September 1, saying, “Once again the fix is in for this barely there celebrity offspring on this network reality show.”

Fairly accurately, he predicted, “she will be hated by the general public and voted off the first week.” So, he alleged, “the producers guaranteed she can remain until week three. After that, they won’t protect her any longer.” Well, in the premiere of Dancing with the Stars and in the second episode, Olivia Jade proved that she doesn’t need protection. She and Val Chmerkovskiy made some respectable scores.

Dancing With The Stars Spoilers – Robert Mills Denies A Deal

A Twitter user, @andrea_reiher repeated the deal rumor on September 28. Quick to slam it down, ABC Exec, Robert Mills responded. He wrote, “This is the dumbest thing I’ve ever heard. The show is a competition and as such is subject to legal and broadcast standard regulations.” 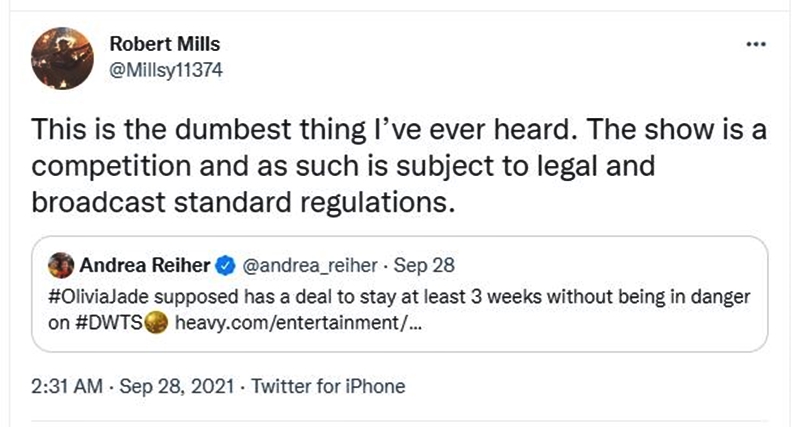 Nevertheless, skeptics remain unconvinced. One of them commented in the replies, “Ya know what else is a competition with legal regulations? COLLEGE ADMISSION.”