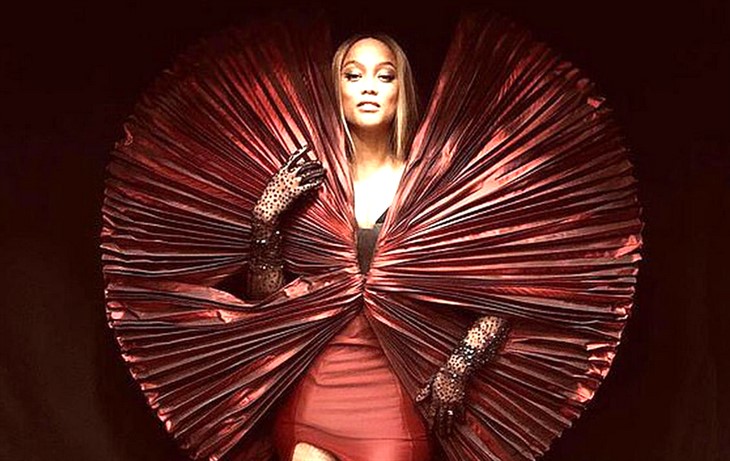 Dancing with the Stars (DWTS) spoilers show that execs brought in Tyra Banks to replace Tom Bergeron and Erin Andrews. Always flamboyant, the former America’s Next Top Model host was expected to place herself front and center. At least, ABC fans assumed that she would. Now, in Season 30, her efforts to shock and awe just backfired and fans took to social media to roast her.

In Season 29, everything that fans feared about Tyra being too attention-seeking, came true. Ahead of the show, Tyra shared a photo of herself looking very glammed-up in her version of a sexy Minnie Mouse costume. At the time, her caption read: “Hope I make you proud, @minniemouse. I’m channeling you tonight on the @dancingabc.” Naturally, she took a lot of heat for it.

DWTS fans just have to accept that Tyra Banks, now an executive producer for the show, will be around for a long time. However, that doesn’t mean they need to approve of her. In this week’s show, she made it all about herself by dressing ridiculously, fans thought. The Dancing with the Stars host changed her outfit hallway through. And it looked astonishing, fans agreed. ABC noted that she claimed it paid homage to her past life as a Victoria’s Secret Angel.

Tyra Banks went viral in her oversized fan-shaped sleeves. Actually, many folks thought she resembled the dilophosaurus that killed Dennis Nedry (Wayne Knight) in Jurassic Park. One of those, Blogger John Yates, shared a photo on his Instagram. He captioned it with, “Who wore it better? Tyra Banks or the spitting Jurassic Park Dinosaur?“

Many DWTS fans responded and gave Tyra a roasting. Actually, they felt the DINO did it way better. One of them said, “My money’s on the Jurassic Park Dino!!!!!!!!!😂😂😂 WHAT WAS SHE THINKING???????😶‍🌫️.” Then another fan wrote, “Omg, I was thinking the same thing. I’m pretty  [sure] the costume designer can’t stand her.” This comment also came along: “Omg you know someone was high watching Jurassic park and got ideas🤣.”

Tyra Banks got scorched by many similar comments. One of them read, “The dinosaur, Tyra supports swimming with the dolphins and fur.” Then, someone else wrote, “Dinosaur for the WIN 🏆.” 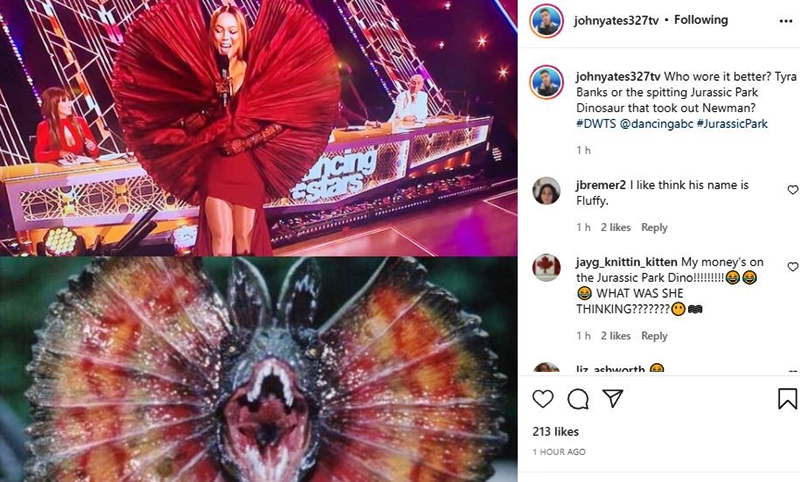 What are your thoughts on the DINO dress that Tyra Banks wore during the Dancing with the Stars show? Do you think it looked okay? Or was it too hideous? Sound off in the comments below.