The Bold And The Beautiful (B&B) Spoilers: Will Eric Have a Heart Attack Under Bridge’s Pounding? 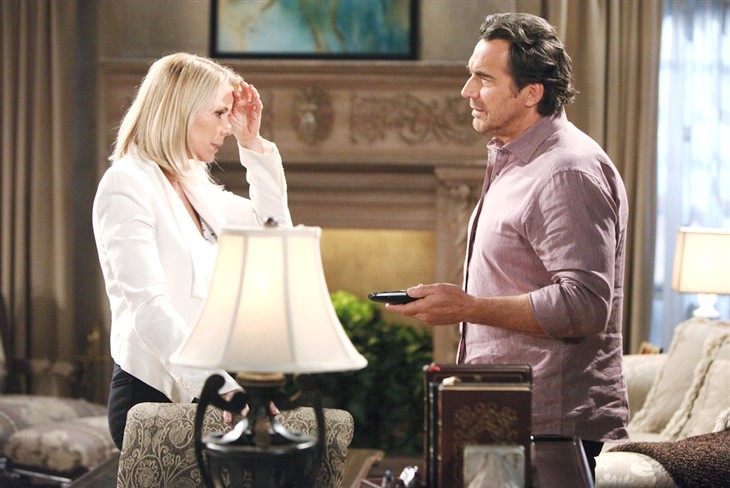 The Bold and the Beautiful (B&B) spoilers document that Ridge Forrester (Thorsten Kaye) and Brooke Logan (Katherine Kelly Lang) went ballistic, as expected. Justin Barber (Aaron Spears) was conflicted, as he did not want to tell them what he saw at Carter Walton’s (Lawrence Saint-Victor) condominium.

Despite Carter and Quinn Fuller’s (Rena Sofer) pleading, Justin bee-lined to Forrester Creations, which is the home of his new employer. He relayed the dirt he dug on Quarter.

The rapid nature of Justin’s find and quick divulge to Bridge confirmed that B&B is pushing this storyline hard.

The Bold And The Beautiful Spoilers – Meanwhile At The Mansion

Katie Logan (Heather Tom) and Eric Forrester (John McCook) looked like two poor souls. There was Katie, crying about Bill Spencer (Don Diamont). And there was Eric, distraught and defeated because he cannot be a husband to Quinn.

The intriguing nature of the Forrester mansion pairing, which has become a regular two-person, living room session in recent days, implies that Keric is forming into more than friends. Katie is the Logan sister who Eric never married.

Might Donna Logan (Jennifer Gareis) be out of luck? It seems possible now that Katie is serving as Eric’s confidant.

B&B Spoilers – Chaos At The Condominium

Carter and Quinn were hoping and praying that Justin took their heartfelt pleas to heart. They implored him not to tell Ridge what he caught them doing.

But Justin has to be loyal to Ridge because he and Thomas Forrester (Matthew Atkinson) agreed not to press charges in return for his services. So, Justin is done with Dollar Bill and now handles special assignments for Ridge.

Based on Justin’s tell, Ridge and Brooke drove to Carter’s condo, pounded on the door, and demanded entry. Carter obliged, knowing that he and Quinn’s arrangement was officially out of their control.

The Bold And The Beautiful Spoilers: Steffy And Sheila Feud Explodeshttps://t.co/42UbQkWnXl

The Bold And The Beautiful Spoilers – How Is Eric Forrester Affected?

Eric is a mature man. Fans are right to be concerned for him, wondering if he will suffer a heart attack, assuming Bridge interrogates him following the lash-out against Quarter.

This is such a soapy scenario. Eric endorses Quarter because he is desperate to remain married to Quinn. Sofer’s character admits to loving Eric and Carter. Saint-Victor’s character has fallen in love with Quinn. And Bridge is now in the middle of it all thanks to Bill’s ex-best friend’s record-time detective work.