Days Of Our Lives (DOOL) Spoilers: Philip Lashes Out At Chloe For Her So-Called ‘Betrayal’ 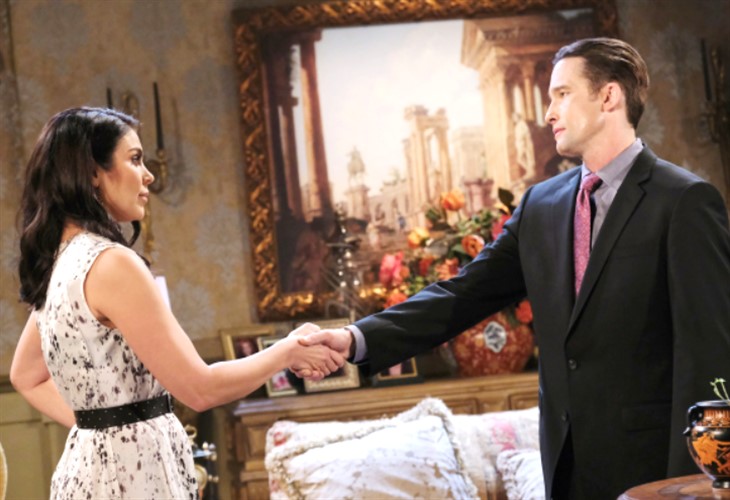 Days of Our Lives (DOOL) spoilers tease that Philip Kiriakis’ (Jay Kenneth Johnson) jealousy will again get the best of him as he lashes out at Chloe Lane (Nadia Bjorlin) for her so-called “betrayal” in an upcoming episode of Days of Our Lives!

Longtime Days of Our Lives viewers will remember that there has been a romantic rivalry between Philip and Brady Black (Eric Martsolf) over Chloe going back for years! In a recent Days of Our Lives episode, Philip had taken Chloe out in the woods to where a tree significant to their relationship once stood. They had carved their initials in it when they were dating for the first time but then when Chloe started dating Brady, Philip had taken his anger and an axe to it and chopped it down!

Days Of Our Lives (DOOL) Spoilers: Dan Feuerriegel Gets Graphic And We Think You’ll Love It

Philip bought a little tree to replace that tree with and he and Chloe planted it where the old one had once stood, as a symbol of their new beginning with each other. But it turns out that new beginning is likely to be chopped down at the roots again because of Philip’s insane jealousy when he finds out about Brady’s outing with Chloe – and his daughter Rachel Black (Finley Rose Slater).

Days of Our Lives viewers know that Chloe is being a friend to Brady and a mother figure to Rachel when she goes along on this father-daughter outing. Philip’s insane jealousy is almost beginning to rival Rachel’s mother Kristen DiMera (Stacy Haiduk)! Days of Our Lives viewers will recall that Kristen’s jealousy over seeing a photo of Brady and Chloe sharing a simple but platonic New Years’ Eve kiss is what prompted her to switch places with Susan Banks (Stacy Haiduk) and perpetrate a reign of terror that caused the disappearance of Sarah Horton (Linsey Godfrey) and the near disappearance of Kate Roberts (Lauren Koslow) as well as many other crimes committed in order to “keep up appearances”!

Philip, suspicious to the max, followed Brady and Chloe to a meeting in a recent episode that was out of town but Brady’s plane had problems and they had to stay in a hotel room together in Pennsylvania. Chloe almost dumped him there over his jealousy and now he’s possibly going to stalk her and Brady again, this time possibly in front of Rachel!

If Philip does indeed find out about the picnic because of stalking Chloe and Brady and shows up there in front of Rachel to vent his jealous accusations, Chloe might just give him the final heave-ho! But the wording that is used to describe this scene is “betrayal” so at least it might be in private.

There will be some very confrontational scenes nonetheless, because Philip again is misinterpreting Chloe’s actions and shows a lack of trust. Days of Our Lives viewers know that jealousy and lack of trust is the death knell of any relationship, and Chloe is not a woman who will give in to being controlled! Days of Our Lives viewers will not be surprised if Philip’s accusing Chloe of betraying him by going on a fun fall outing and being a mother figure to a little girl who may never see her mother again is the end of “Phloe” for good!