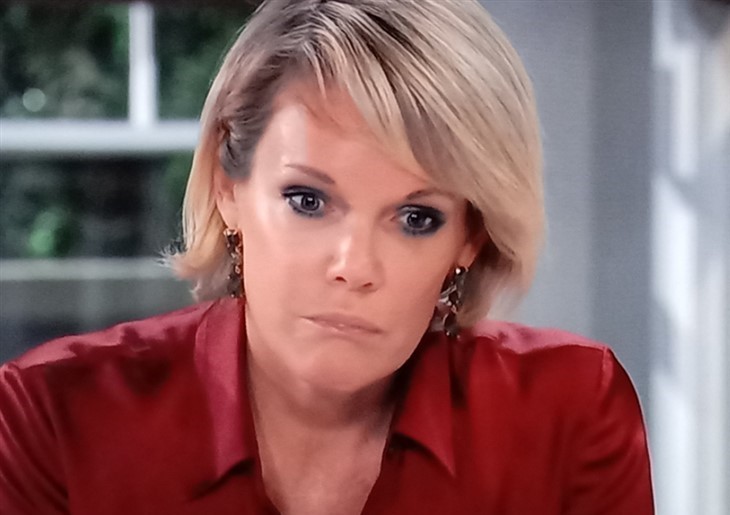 General Hospital (GH) spoilers tease that Ava Cassadine (Maura West) will get the last word after her surprising revelation to Kevin Collins (Jon Lindstrom) in an upcoming episode of General Hospital!

General Hospital viewers will recall that Cameron Webber, (William Lipton) Trina Robinson, (Sydney Mikayla) and Josslyn Jacks (Eden McCoy) banded together to set a trap for Spencer Cassadine (Nicholas Chavez) and expose him as Ava’s stalker. Esme Prince (Avery Kristen Pohl) figures heavily into this trap as well, but it is Spencer who will wind up confessing. General Hospital viewers won’t see him incriminating Esme, however. Nikolas Cassadine (Marcus Coloma) will also figure into this trap but not have any active part in Spencer’s confession.

Instead, it will be Sonny Corinthos (Maurice Benard) who will cause Spencer to confess! Joss, Trina and Cameron tell a lie to Sonny at Nikolas’ expense – they tell him Nikolas plans to flee the country and take Avery Corinthos-Jerome (Ava and Grace Scarola) with him! Sonny, of course, will take immediate action to prevent that and head over to Wyndemere!

General Hospital viewers will recall that Nikolas already received a beating in a recent episode of General Hospital by Ava’s bodyguards – but not in front of Spencer. Seeing Sonny beating his father to a pulp will put a guilt trip of major proportions on Spencer, and he will confess to being the stalker right as Ava walks in! Ava likely got some sort of an invite or she wouldn’t be there at exactly the right time to see Spencer confess!

Spencer will likely confess to acting alone since he doesn’t want to incriminate Esme, who is a major player in the stalking situation as well. Trina already figured that out although she cannot prove just yet that Esme torched Ava’s car and duplicated Kiki Jerome’s (Hayley Erin) work badge to leave at the scene! It is hearing Spencer confess to the stalking incidents that Ava will surprise Kevin with when she tells him all about it!

Of course, when Ava sees Sonny beating Nikolas to a pulp she’ll tell him to stop! Spencer will tell Sonny to stop as well, and that is when he confesses his stalking crimes. This will of course prompt Nikolas to take some action and Spencer will be evicted from Wyndemere Castle! Who can blame him? Nikolas is finally learning the value of “tough love” and undoubtedly Uncle Sonny will have quite a tongue lashing for Spencer too when he hears his confession!

After all, even Avery was affected by the “gifts” when a talking teddy bear that had Ryan Chamberlain’s (Jon Lindstrom) voice was delivered to the Metro Court suite that Ava, Nikolas and Avery had moved into for their own safety! General Hospital viewers will remember that scene! General Hospital viewers will also see Ava have the last word on the whole situation as she reveals what she now knows to Kevin – who likely will recommend family counseling for Nikolas and Spencer!