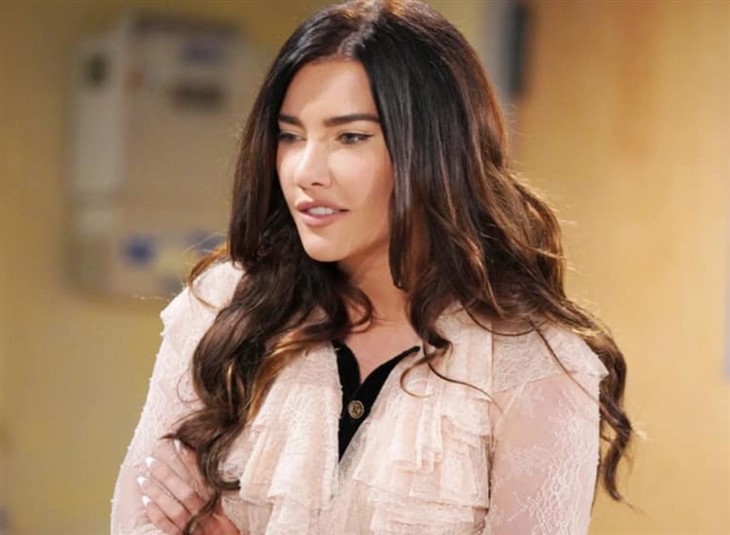 The Bold and the Beautiful (B&B) spoilers document that Steffy Forrester Finnegan (Jacqueline MacInnes Wood) believes that her most vexing problem is the return of Sheila Carter (Kimberlin Brown). That is true, as she is, incredibly, John Finn Finnegan’s (Tanner Novlan), mother. However, this epic villain’s latest comeback will also serve as a distraction from another issue.

Paris Buckingham (Diamond White) was presented as a full contrast to her sister, Zoe Buckingham (Kiara Barnes). Paris was sweet and caring, with Zoe being self-centering and calculating.

Well, a short time after Zoe left town, Paris now has eyes for Finn. Steffy has no idea that her invited house guest and Forrester Creations’ employee could quickly become a different type of threat to Sinn’s peaceful existence at the cliff house.

The Bold And The Beautiful Spoilers – First, The Mother-In-Law Angle

Sheila does not represent stereotyped mother-in-law trouble for Steffy. No, this person is a psychopath who tortured the Forrester family on many occasions through the years.

Brown’s infamous alter ego committed numerous crimes, including shooting Steffy’s mother, Taylor Hayes (Hunter Tylo), and grandmother, Stephanie Forrester (Susan Flannery). Finn had time to digest his birth mother’s actions and agrees with his wife. Contact with Sheila is dangerous and will not be allowed.

Finn acceded to Steffy’s demand. So, he will not have a relationship with Sheila. Hayes Forrester Finnegan (Samantha Worden and Piper Harriet) will not either.

The pressure that Sheila will continue applying is certain to keep Steffy on edge indefinitely. That will likely cause her to act out in unpredictable ways.

Hopefully, Steffy does not seek relief through prescription medication. The issue she battled and currently has under control is powerful. An unwanted outcome could create renewed tension with Finn leads him to seek solace with Paris.

The Bold And The Beautiful Spoilers – Paris Buckingham’s Surprising Crush

Finn is likable. But Paris never expected to develop a crush on him.

Sheila is sure to continue pursuing some path into Finn’s life. She is currently plotting in the hotel suite. Viewers are likely wondering where Sheila’s funds are coming from, with thoughts of her potentially being rehired at Ill Giardino or possibly at a hospital, where her nursing skills can be put to use.

It will be uplifting if B&B writes a storyline where Steffy and Paris team up to defeat Sheila, rather than having this villain create mayhem that drives those ladies to fight.