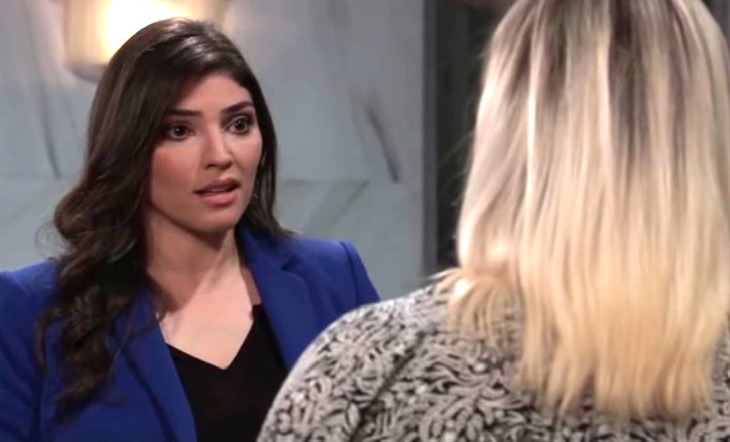 General Hospital (GH) spoilers reveal Peter is running amok again and could frighten Maxie to the point that she makes a drastic decision. This would only complicate things down the road when “Henrik’ is finally dealt with and the truth about her daughter comes to light.

Fear is the reason that Maxie Jones (Kirsten Storms) first begged Brook Lynn Quartermaine (Amanda Setton) to pretend to be the mother of baby Louise Jones (Harper and Scarlett Bloom). She was afraid that Peter August (Wes Ramsey) would take the child away from her and this led to her making irrational choices. Now that he has re-surfaced Maxie is desperate to protect her little girl at all costs.

GH Spoilers – Henrik On The Loose Is Dangerous

When Maxie finds out that Peter intended for Nina Reeves (Cynthia Watros) and Phyllis Caulfield (Joyce Guy), to burn to death, she will be terrified. She will know that her baby daddy has gone full Henrik and want to protect her daughter at all costs. Allowing BLQ to keep Bailey/Louise might seem like the logical choice at the time but eventually, this decision may cause more harm than good.

Wes Ramsey’s contract is up in November, and spoilers have teased a showdown is coming between Peter August and Anna Devane (Finola Hughes). This suggests that the character may soon be dealt with and on his way out on General Hospital.

GH Spoilers – The Aftermath Will Be Painful For All Involved

Once Peter is apprehended or eliminated this opens the door for a lot of pain in Genoa City. Brook Lynn will have to admit to Valentin Cassadine (James Patrick Stuart) that she was never pregnant with his child and Maxie will have to come clean about her deception. Valentin might begin a custody battle and Maxie’s fears about her daughter will return.