The Young and the Restless (Y&R) Spoilers: Amanda And Devon Next Engaged Couple? 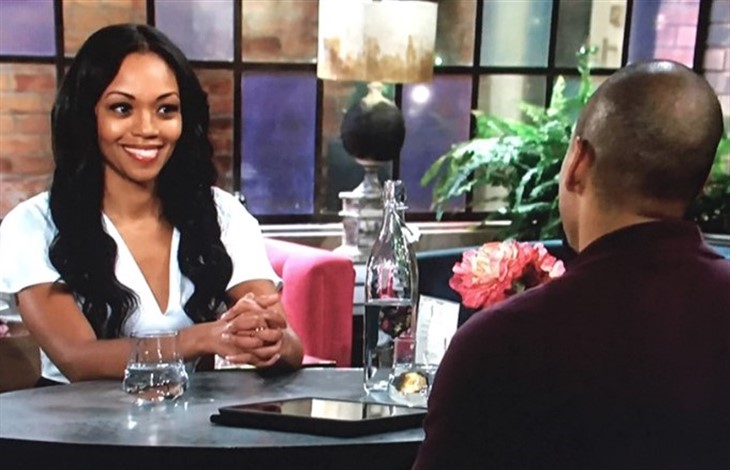 The Young and the Restless (Y&R) spoilers document that Amanda Sinclair (Mishael Morgan) recently accepted Devon Hamilton’s (Bryton James) offer, which deepens Demanda’s connection. This couple could be Y&R’s next engaged couple before the end of the year.

However, Amanda is facing continued family strife. Her mother, Naya Benedict (Ptosha Storey), is dealing with some heart problems that are likely connected to the stress her father, the duplicitous Sutton Ames (Jack Landron), caused.

Thankfully Nate Hastings (Sean Dominic) told Amanda that Naya’s health issue is treatable. He feels confident that she will be okay with the proper care and the passage of time.

Of course, health matters are never one hundred percent certainties. Hopefully Nate’s diagnosis proves out and Naya follows the doctor’s orders. But the coming stress of Sutton’s trial will not help her.

Amanda quickly developed a certain feeling about Sutton. She is a trained observer and used her legal expertise and investigative skills to reveal the truth.

Sutton has not directly admitted to ordering a hit on Richard Nealon (no actor’s name known for this retrospective role). Unless Amanda’s late father is still alive, Landron’s character faces the possibility of being convicted after the upcoming trial that Amanda is prosecuting.

By all that has been learned and due to Sutton’s veiled admissions, it appears as though Richard was targeted because he was the father of Naya’s twin girls, who she decided not to raise. Sutton put his political career ahead of his blood and has coldly rationalized all of it.

Young And The Restless Spoilers – Demanda Is Exactly Right

Fans knew that Morgan’s return to the cast in 2019 at least teased a re-imagined edition of Hevon. The on-screen chemistry between Morgan and James was too good not to revisit.

All has been going well for this couple after Elena Dawson (Brytni Sarpy) decided that she and Devon were not meant to be together. Nelena has become a good couple and gets along well with Demanda.

Devon has been a rock for Amanda where her family matters (a wink to the blockbuster hit sitcom James was part of as a child) are concerned. Amanda should be able to focus on her life with Devon as soon as she can put the Sutton trial behind. That anticipated conclusion should also help Naya’s health improve as well.