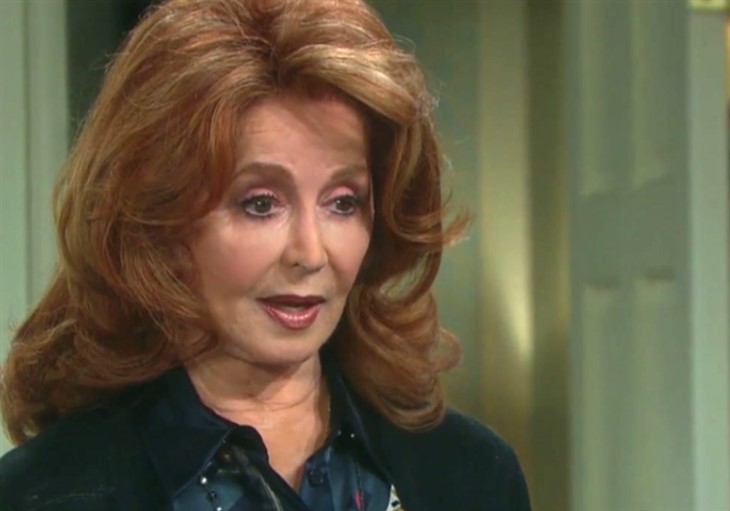 DOOL spoilers reveal that Rogers has been gone for about six months. There was a lot of mystery surrounding Maggie suddenly going off-screen, especially for such a long period of time. In the new issue of Soap Opera Digest, Rogers explained her medical crisis and it all began with a pill not going down properly.

Rogers woke up in the hospital two weeks later and needed rehab. The actress wasn’t released from the hospital until January 2021, which means she spent Thanksgiving, Christmas and New Year’s all by herself due to the hospital’s strict COVID rules on visitors.

The good news is that Rogers is much better and will be back on-screen during the week of October 4.

Maggie had to be written out while Rogers recovered. The off-screen story was that Maggie went to take care of her daughter, Summer. As fans know, Summer was an alcoholic, which she blamed on Maggie. Then, Summer was diagnosed with a deadly condition triggered by her years of drinking, which she also blamed on her mother. Maggie went to care for Summer in her final days. The character comes back to Salem after Summer’s death.

Days of Our Lives spoilers reveal that Maggie has a lot of guilt about Summer’s life and death. Despite Summer making her own choices in life, Maggie can’t help but feel responsible, at least partially. Rogers told the magazine that at a time when Maggie needed Sarah Horton (Linsey Godfrey) the most, she wasn’t there.

However, Maggie does find someone to talk to about Summer’s death and the guilt she carries. That character is Chloe, who doesn’t just give Maggie a listening ear but tells her she’s not responsible for Summer’s bad choices. It is hinted that the two women will share a highly emotional scene.

The helpful advice isn’t just one-sided, though. Chloe will inform Maggie of everything that’s happened while she’s been gone. Chloe will bring up Philip Kiriakis’ (Jay Kenneth Johnson) jealousy. She might even reveal that Victor Kiriakis (John Aniston) told Brady Black (Eric Martsolf) to steal her away from Philip.

Despite Chloe being committed to Philip, it is clear that she’s not over her feelings for Brady. Maggie might sense this and give Chloe some wise advice before trying to talk some sense into Philip. Then, Maggie will deal with Victor’s suggestion to Brady.

After that, there will be more pressing concerns, such as what is going on with Doug Williams (Bill Hayes). Maggie and Ciara Brady Weston (Victoria Konefal) will try to console Julie Williams (Susan Seaforth Hayes). However, can Doug and Julie be saved before it’s too late? Not only does the devil want to silence Doug but is getting pretty fed up with Julie, so we will have to wait and see what happens next.