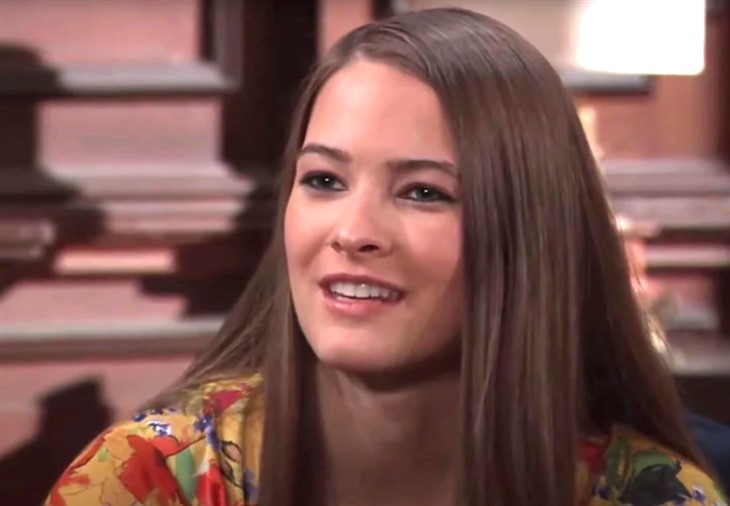 General Hospital (GH) spoilers tease that Esme Prince’s (Avery Kristen Pohl) next shifty maneuver will be to work on Cameron Webber (William Lipton) in an effort to come between him and Josslyn Jacks (Eden McCoy) in an upcoming episode of General Hospital!

General Hospital viewers will recall that Spencer Cassadine (Nicholas Chavez) was busted in a recent episode of General Hospital. After Esme encountered Sonny at General Hospital, she introduced herself as Spencer’s girlfriend and told him she had overheard Nikolas Cassadine (Marcus Coloma) on the phone making plans to run away to Bora Bora with Ava Jerome Cassadine (Maura West) and take Avery Jerome-Corinthos (Ava and Grace Scarola) with them.

The Bora Bora trip had been a trap for Spencer to confess to being Ava’s stalker, but Avery was Esme’s addition after being tricked herself with the Bora Bora trip. Josslyn Jacks (Eden McCoy) got a photo of Esme talking to Sonny, and after Sonny and a couple of his goons started to beat up Nikolas in front of Spencer, he confessed but threw Esme under the bus. He admitted she had been the one to set Ava’s car on fire. As a result, Nikolas evicted Spencer and Esme, and cut off Spencer’s inheritance trust fund and credit cards!

General Hospital viewers know that Esme will find out that Spencer outed her for burning Ava’s car, and she may even be brought up on arson charges. A General Hospital leaked script from several weeks ago shows Spencer will be in court as well, and that might be for the malicious damage done to Ava’s gallery with a bloodlike substance Spencer primed the sprinkler system with. It caused thousands of dollars in damage to some priceless art pieces in the gallery. But before all that happens, Esme will want revenge on those who set the traps for herself and Spencer. Esme realizes that Cameron was a prime conspirator with Josslyn a close second. Trina Robinson (Sydney Mikayla) was in on it to, but Esme chooses to start with Cameron and starts working on him in an effort to drive a wedge between him and Josslyn!

General Hospital viewers can guess that Esme’s ploy is to play the damsel in distress to Cameron’s knight in white armor, but her end game is to make Josslyn think that Cam is into her! General Hospital viewers won’t be one bit surprised to see that Esme has set up a scenario for Josslyn to witness with Esme up close and personal with Cameron, probably in an uninvited hug on his part! But what does a young man do when a young woman pretends to faint or collapses in crocodile tears in front of him?

Let her fall to the floor, or push her away when she wants a shoulder to cry on? Cameron wasn’t raised like that and Esme knows it! Esme is like Ryan Chamberlain (Jon Lindstrom) and very good at hiding herself. She has fine-tuned in herself the art of lurking and listening, and she has seen Cameron around his mother Elizabeth Baldwin (Rebecca Herbst). That has given her every clue she needs to know that Cameron is a gentleman! She makes sure Josslyn is approaching when she hones in for the kill, and will cause a huge misunderstanding between Joss and Cam! Esme doesn’t really want him – she just wants Joss to think she does!