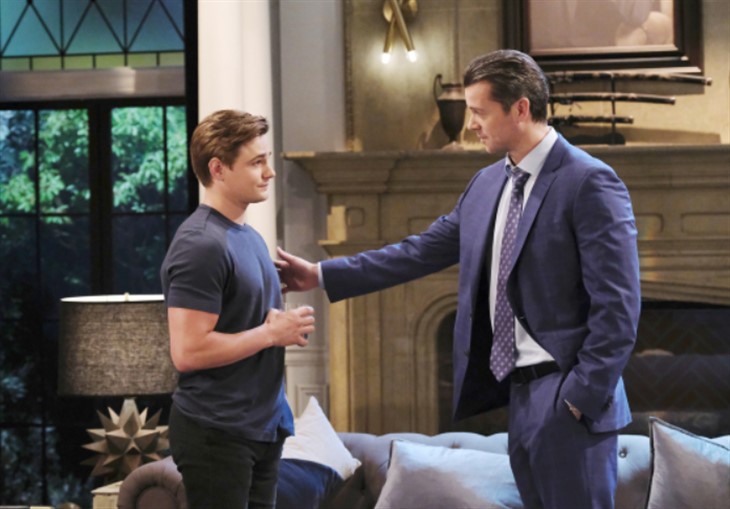 Days of Our Lives (DOOL) spoilers tease that EJ DiMera (Dan Feuerriegel) will blindside Chad and Abigail DiMera (Billy Flynn, Marcy Miller) in an upcoming episode of Days of Our Lives!

Days of Our Lives viewers will recall that EJ DiMera has been totally against his son Johnny DiMera’s (Carson Boatman) fledgling film career from the start! EJ wants Johnny to be like him and be a proper DiMera with only the DiMera legacy and businesses on his mind. Johnny refused, and doesn’t care what his father says, he’s going his own way. That independence probably came from his mother, Sami DiMera (Alison Sweeney).

Days of Our Lives viewers will recall that his mother and her life is the subject of his film, to be called “The Sami Brady Story” based on a script written several years ago by his older half-brother Will Horton (Chandler Massey). At first, EJ ordered Chad to convince Johnny to join the family business. To be honest, Chad didn’t really try all that hard. But now that not only did Chad not convince Johnny to give up on his dreams, but he and Abigail agreed to act in the movie, EJ’s on the warpath!

Days of Our Lives viewers know that EJ considers family loyalty to practically be blind obedience to him as the CEO of DiMera Enterprises! He’s supposed to be CO-CEO with Chad, but when he sees that Chad has made this decision to act in Johnny’s movie, which EJ doesn’t agree with at all, he will consider it a betrayal by Chad! Days of Our Lives viewers will recall that EJ was also very upset that Johnny was not portraying him as the love of Sami’s life, but rather Lucas Horton (Bryan Datillo)! EJ was almost okay with the movie for a hot minute as long as his huge ego was fed by the thought that he’d be featured in a large character role in the movie but once Johnny told him he was not, that was the end of that! Chad is to play John Black (Drake Hogestyn) while Abigail is to play Marlena Evans (Deidre Hall). Johnny asked his sister Allie Horton (Lindsay Arnold) to play their mother Sami, although that had not been set in stone.

Days Of Our Lives Spoilers – Another Mansion Eviction?

Days of Our Lives viewers will not be surprised, considering how egotistical EJ is, that another mansion eviction will take place in upcoming episodes of Days of Our Lives. This time instead of Jake DiMera (Brandon Barash) and Gabi Hernandez (Camila Banus) it will be Chad and Abigail and family! That is truly cruel considering Chad and Abigail have two small children they do not really want to uproot! But with EJ, it’s all about EJ – one would think his initials stand for “Entitled Jerk” instead of “Elvis John!” Undoubtedly his mother Susan Banks (Stacy Haiduk) would not approve of such a move, and Days of Our Lives viewers can imagine her shaking her finger in his face and saying “Shame, shame, shame on you, Elvis John DiMera!”