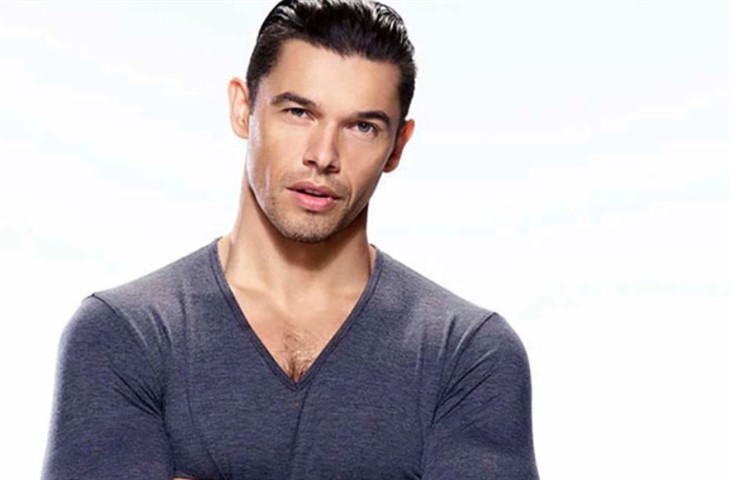 Days of Our Lives (DOOL) spoilers suggest that Paul Telfer, who plays Xander Kiriakis, has been waiting with bated breath for Sarah Horton’s (ex-Linsey Godfrey) fate to be revealed. Now that Xander has moved on with Gwen Rizczech (Emily O’Brien), Telfer hopes for a Sarah – Gwen – Xander triangle. Will he get his wish?

Days Of Our Lives Spoilers – A Romance Interrupted

Days of Our Lives Xander was about to marry Sarah when she suddenly revealed that she was leaving town with Rex Brady (Kyle Lowder). Little does Xander know that he was talking to Kristen Dimera (Stacy Haiduk) in a mask. Xander thought that he and Sarah would be living happily right now in their little corner of the world with no problems. Unfortunately, Xander was very wrong. Sarah has spent months on an island where she has been held hostage by Kristen. Will Sarah forgive Xander for not realizing that he was talking to Kristen? Will Sarah refuse to get close to Xander again because of his mistake?

Days Of Our Lives (DOOL) Spoilers: Marlena’s Gory Sacrifice For Doug Is Irreversible?

Days of Our Lives Telfer says he could see Sarah returning mad as hell because he didn’t realize what was going on. After all, Sarah has been in survival mode all of this time trying to keep herself alive and sane on a deserted island. Sarah could have easily spent all this time away building up resentment against Xander for not looking for her. Sarah could be especially upset that Xander has a new girlfriend as well. Perhaps Sarah believes that Xander should have at least pined for her for a little while before jumping into another woman’s bed. Sarah could return as a very vengeful person and Xander could be on the receiving end of that.

Days of Our Lives Xander and Gwen both grew up rough and had to fight for everything they have. Gwen and Xander have connected on a level that he and Sarah couldn’t. Xander has strong feelings for Gwen. Xander has been Gwen’s knight in shining armor, trying to protect her reputation and her relationship with Jack Deveraux (Matthew Ashford). Where will Xander be if Sarah returns? How can Xander choose between the two women in his life?

Xander is likely to be stuck in the middle of an impossible situation as he tries to make things ok for both women. Unfortunately, by the time things are said and done, Xander may not have either woman. What will Xander do if he comes face to face with Sarah and Gwen? Which woman will win his heart in the end?