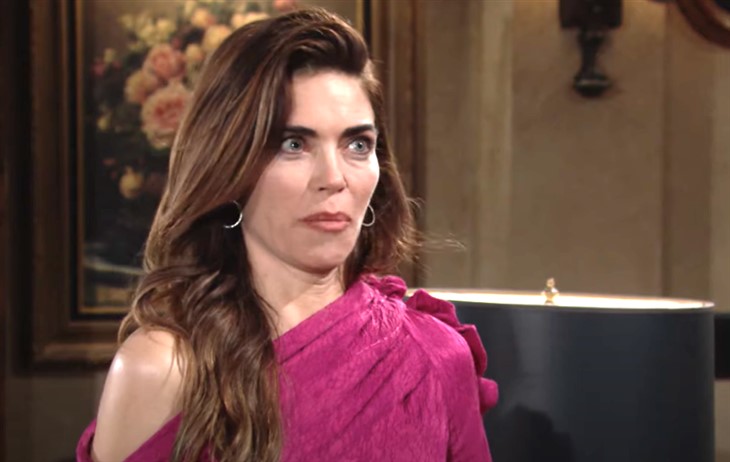 The Young and the Restless (Y&R) spoilers document that Victoria Newman (Amelia Heinle) feels compelled to marry Ashland Locke (Richard Burgi) no matter what his backstory reveal. She has already merged Newman Enterprises with the Locke Communications Group (LCG) and has an imminent wedding date.

Tuscany, Italy, is the gorgeous setting for the intended nuptials. Canceling the event would be totally humiliating and potentially endanger Newman-Locke’s stability.

Ashland’s teased admission of theft provides yet another vexing problem and provokes a question. Does the merger insulate the combined company from Ashland’s money steal decades ago?

The Young And The Restless Spoilers – Taking A Conditioned Flight

Victoria wanted Ashland to tell her whatever secrets he is keeping in Genoa City, Wisconsin. He asked that she fly with him to Tuscany so they could have privacy to talk.

It is fair for hardcore fans to question Victoria’s nod to Ashland. She has opposed many requests that were not nearly as serious in the past. But the overwhelming influence of love can be factored in for believability and to push the plot.

As part of this tale and with what can now be assumed about Ashland’s personality, it is reasonable to ask the following question. Did he target Victoria to make the merger happen, with the understanding that she is the one who pushed for this deal?

Ashland has not denied making calculated business moves throughout his career. He embraced the Locke Ness Monster moniker as representing his strength and resilience in creating the media empire.

Sure, Ashland finds Victoria to be impressive as a person and physically attractive. Anyone can acknowledge that she is both. But with whatever Ashland thinks of her appeal and even if he has fallen in love with her, it is fair to suggest that her spot atop Newman Enterprises was seen as uniquely valuable.

The Young And The Restless Spoilers: Phyllis Drama Erupts – Nick Or Jack?https://t.co/PHgDzJpUPs

Ashland may have gained cover now that he has legally merged his company with Newman Enterprises. Whatever legal jeopardy he may face for supposedly stealing Camilla’s inheritance to form LCG, the merged company should be protected.

Victoria suggested that she would be the perfect person to further Ashland’s legacy after he was gone. His cancer diagnosis was projected to be the factor that left her as the sole defender. But current reveals could mean that jail time subtracts Ashland from Newman-Locke, with Victoria not being impacted by legal outcomes.