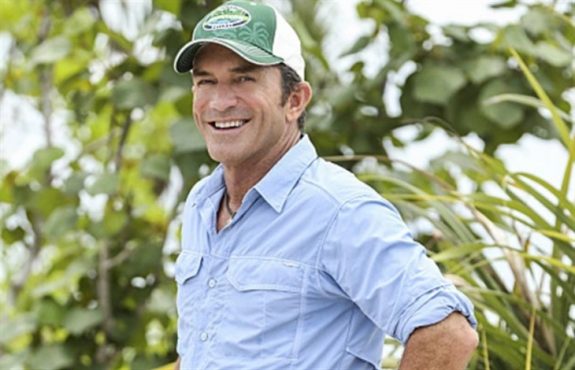 Survivor spoilers reveal that the show just began its 41st season. And once again, dimpled and dapper host Jeff Probst has challenged his castaways to outplay their rivals.

But this season, fans seem more worried for Jeff’s health than any of the stranded castaways!

Find out why below.

And now, at 59, Probst began Season 41 of Survivor with that famous grin and positive attitude still going strong.

So why have Survivor message boards lit up with concern for the show’s host? The worried exchanges among fans focus on his voice as well as his appearance.

In an era where the COVID pandemic seemed to explode without warning, any sign of illness takes on new meaning.

And that may rank as the top reason for fans to get so obsessed with Jeff Probst’s health.

During the premiere episode, Probst seemed fine, yelling with his trademark enthusiasm.

However, a few noticed that he seemed to be thinner and pale.

And the second episode, “Juggling Chainsaws,” which aired on September 29, resulted in more fans getting worried about Jeff.

Many thought the Survivor host seemed unable to talk with his usual strength, looking pale and thinner.

As a result, some viewers thought that his strained voice and changed appearance could indicate that Jeff had become ill.

Survivor Spoilers – What Did Jeff Probst Tell His Twitter Followers?

Survivor viewers know Jeff Probst as the man who could outdo the Energizer Bunny when it comes to vigor.

As a result, the Survivor host’s quieter, hoarse voice came as a shock.

But while fans worried, Probst himself seemed determined to push through.

And for those turning to his Twitter feed hoping for an answer, Jeff focused in his usual style on the Survivor game rather than himself.

Intriguingly, though, a Twitter clip he posted showed no indication of vocal problems.

Here’s your What Would You Do strategy question around a situation that happens in this week’s #Survivor. Tell me how you’d handle it then watch what happens tonight. pic.twitter.com/BUNvse5voQ

“Here’s your What Would You Do strategy question around a situation that happens in this week’s #Survivor,” tweeted Jeff just prior to the start of the most recent episode.

“Tell me how you’d handle it then watch what happens tonight.”

For those fans listening closely to Jeff on the second episode, though, watching Probst rather than the castaways turned into the main event.

And many of Probst’s social media followers asked him directly on Twitter.

“I couldn’t concentrate on this question or much of the show tonight,” wrote one fan in response to Jeff’s challenge.

“Worried about you from the premiere (weight loss) and since, especially tonight, both my husband and I just wanted to cough or clear our throats for you. #worried #hopeyoureok #love.”

And other fans agreed.

“I was thinking the same thing. He looks awfully pale and losing weight,” chimed in one of Jeff’s Twitter followers.

What do you think? Are you concerned about Survivor Host Jeff Probst’s health? Tweet us your views!

And be sure to check back on our site for all the news and updates on Survivor Season 41 and Jeff Probst.