The Bold And The Beautiful (B&B) Spoilers: Katie’s Back With Bill Again? 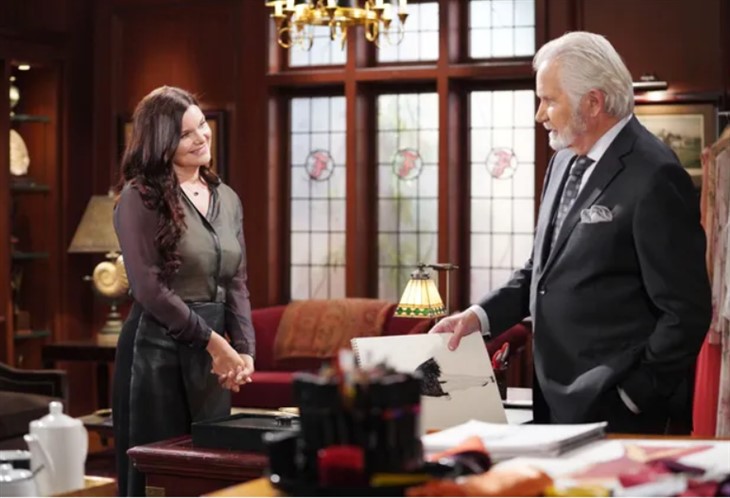 The Bold and the Beautiful (B&B) spoilers document that Katie Logan (Heather Tom) has gotten close to Eric Forrester (John McCook) in recent weeks. Her proximity, as his next-door neighbor and connection through family, has allowed frequent visits to the mansion.

Quinn Fuller (Rena Sofer) has been absent during the heart-to-hearts with Eric. She was generally off with Carter Walton (Lawrence Saint-Victor) at Eric’s incredible request.

It is fair to suggest that Katie is in a position to become Eric’s new love interest. She is single and clearly fond of him. But Bill Spencer (Don Diamont) will be back in the frame again soon.

The Bold And The Beautiful (B&B) Spoilers: Eric’s Fears Are Overwhelming Will James Return To Help?

The Bold And The Beautiful Spoilers – Queric Is Definitely Wobbling

Quinn and Eric have been growing apart for a long time. The scheme that Quinn encouraged her friend, Shauna Fulton (Denise Richards), to pursue set Eric off when it was exposed.

Brooke Logan Forrester (Katherine Kelly Lang) was Quinn’s target, as she believed Shauna could take advantage of Bridge’s troubles. Eric was angry about the plot. He was also reminded about Quinn’s flirtatious involvement with Ridge Forrester (Thorsten Kaye) a handful of years ago.

In recent months Quinn was banished from the mansion and then returned. But Eric concluded that he could not live without his wife and developed an arrangement that compensated for an ED issue, which darkened his perspective.

B&B Spoilers – Katie Logan Realizes What Love Must Be

Katie became very emotional when talking with Eric about Bill. While McCook’s character told her that Bill was devoted to his sons and grandchildren, he also advised that she deserved someone who loved her completely.

Eric does not appear to be in a state of mind that would allow him to move on to another woman. Katie is not one of his ex-wives, with her sister, Donna Logan (Jennifer Gareis), the clear choice to comfort Eric now.

So, it could be that Katie and Eric’s commiseration sessions result in a new love match between these characters. Alternatively, a Batie reunion could be sparked.

The Bold And The Beautiful Spoilers – Bill Spencer Is Enough?

Diamont is a terrific actor. His performance as Bill is arguably, if not certainly, the role of his career.

Katie and Bill have been apart for a long time. That was Bill’s fault and he took responsibility. Diamont’s alter ego also did something that was not part of his demeanor in the past. He has been patient.

Batie fans do not want to see Katie go in another direction. They know that Bill would be heartbroken and hard-pressed to challenge Eric. So, time will soon reveal if Katie still loves Bill enough to reconcile again.