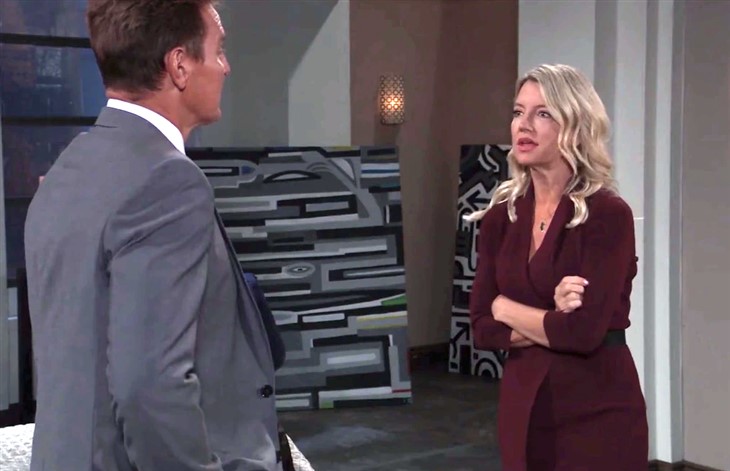 General Hospital (GH) spoilers indicate that Nina Reeves (Cynthia Watros) may soon forgive Jasper “Jax” Jacks (Ingo Rademacher). Now that Nina has forgiven Jax, perhaps they can reunite. Can Jax and Nina make a go of a relationship this time?

General Hospital’s Nina has lied about Sonny Corinthos (Maurice Benard) for months. As soon as Jax realized the truth, he made sure that Sonny had the means to get home to his wife and family. However, Jax knows that Nina needs to deal with her issues before they get back into a relationship, Is Nina ready to dates again or does she need to deal with her feelings for Sonny first? Can Jax keep the peace between Carly Corinthos (Laura Wright) and Nina? Carly has promised to destroy Nina’s life and it is hard to saw what lengths that Carly will go through to do that. Can Jax trust Nina to be honest with him about her life now that she has lied for months?

General Hospital’s Jocelyn Jacks (Eden McCoy) always encouraged Jax and Nina’s relationship. Nina and Jax were good together. Jocelyn got along well with Nina and Nina treated her very nicely. Jocelyn was fine with Nina in her life until she started doing things that hurt her family.

Finding out that Nelle Benson (Chloe Lanier) was Nina’s daughter made things a bit awkward. Nina’s actions that cut her out of Wiley Corinthos (Caleb and Kyler Ends) were very questionable. Jocelyn loves her family and she isn’t about to stand by and let someone hurt them. Hurting Wiley was one thing but Nina crossed that line when she kept quiet about Sonny. Nina hurt Jocelyn’s entire family by being quiet, especially her mother.

General Hospital’s decision to stay quiet about Sonny. Jocelyn has told everyone what Nina has done and does not expect to have to deal with her any longer. However, Jocelyn isn’t about to forgive everything that Nina has done. Jocelyn simply cannot fathom how her father could allow Nina back into his life. How could Jax be with someone who has hurt her family this much? Does Jax care nothing about Jocelyn’s feelings at all? Do Nina’s actions not matter to Jax at all?

Jocelyn may cut ties with Jax and make him choose between her and Nina. Will Jax side with his daughter and move away from Nina? Will Nina be the breaking point between the father and daughter?