The Bold And The Beautiful (B&B) Spoilers: Paris Conflicted, Surrounded By Many Romantic Suitors 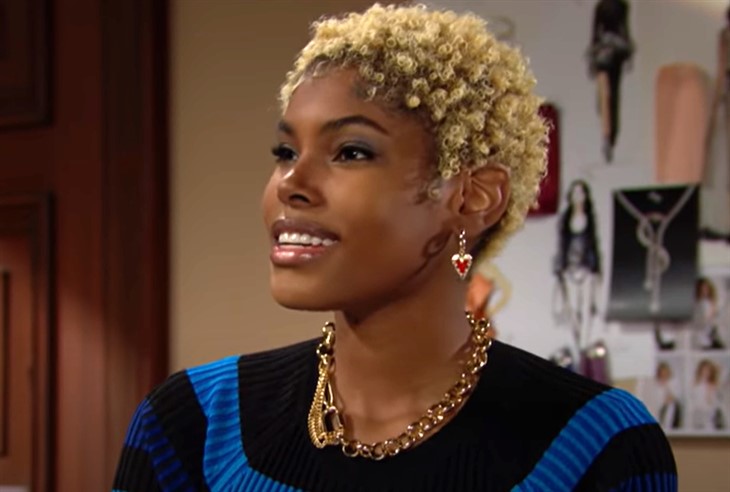 The Bold and the Beautiful (B&B) spoilers and updates tease Paris Buckingham (Diamond White) may find that her romantic life gets complicated. Paris has been in a relationship with Zende Forrester Dominguez (Delon de Metz). She had been living with Steffy Forrester (Jacqueline MacInnes Wood) and her husband Dr. John Finnegan (Tanner Novlan). She had gotten close to Finn while she was living with Steffy and Finn. Paris has connected with Thomas Forrester (Matthew Atkinson) who had been involved with her sister Zoe Buckingham (Kiara Barnes).

Paris is in a good relationship with Zende. They have overcome many problems together. Paris was upset for a time that Zende showed interest in Zoe but has forgiven him. Zende proved to Paris that he was committed to her by designing a dress for her and arranging a romantic date with a French theme. Paris arranged for a special outing at Dodgers Stadium where she sang at the game as a gift for Zende. Paris wants to stay committed to the relationship that she has with Zende.

The Bold And The Beautiful Spoilers – Paris Buchingham With Live In Friend Dr. John Finnegan

Paris was surprised that she has made a connection to Thomas. Paris helped Thomas when he was having trouble with a design that he was creating for the fashion line that Hope Spencer (Annika Noelle) created called Hope for the Future. Thomas felt that he needs to apologize for mistreating Zoe when he was in a relationship with her. Paris was impressed with Thomas for his apology. Thomas was impressed when he saw Paris sing at the Dodgers game. Thomas has started see Paris in a new light.

B&B Spoilers – Paris Buckingham Has A Difficult Choice To Make

The Bold and the Beautiful Paris will need to choose the man that she will give her heart to. Paris wants to stay with Zende who is committed to her. Will Paris and Zende find a way to stay together? Paris does not want to come between Finn and Steffy. Will Paris be able to stay away from Finn if he continues to have problems with his marriage to Steffy over Sheila? Paris may find that Thomas could become more than a friend to her. Will Paris find a new love with Thomas in the future? Be sure to catch up on everything happening with B&B right now. Come back here often for The Bold and the Beautiful spoilers, news, and updates.