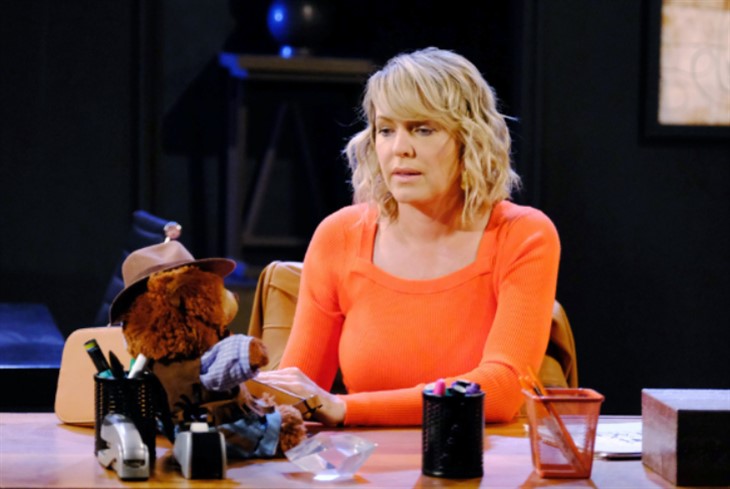 Days of Our Lives spoilers reveal that Nicole Walker (Arianne Zucker) always plays the martyr. Whether she’s being good or naughty, Saint Nicole is always the victim. Walking away from Rafe Hernandez (Galen Gering) isn’t a sacrifice – it’s her way of screaming for attention while Ava Vitali’s (Tamara Braun) progress gets trashed.

DOOL spoilers reveal that Nicole has feelings for Rafe. However, when she did tell the commissioner how she felt – while she was still married to Eric Brady (Greg Vaughan) – she was rejected. Rafe wasn’t going to admit he had feelings for a married woman. Nicole’s not just any married woman, though. Nicole was married to Salem’s good boy, who just happens to be a former priest.

It was the whole reason why Nicole slept with Xander Cook (Paul Telfer). It had very little to do with Eric staying in Africa longer than he promised. The truth is that she wanted Rafe. When he rejected her, Nicole had a temper tantrum, got drunk and had a one-night stand with the worst person possible. It was a guaranteed way of making her “mistake” someone else’s fault.

Despite her claim that she was trying to keep the one-night stand under wraps, Nicole’s behavior actually screamed, “I’m guilty of something, keep asking me about it until I crack.”

Nicole is smack in the middle of a divorce and is available. However, Rafe is not single and remains in a relationship with Ava. Knowing how “Racole” feel about each other, Ava tried to bow out of the romance. However, Rafe asked her to stay with him while Nicole refuses to tell Rafe how she feels. She did it once before and was rejected, so she doesn’t want to take that chance again.

Then, to get more attention and to guarantee that Rafe would chase after her, Nicole made her “sacrifice.” In order to help “save” Ava’s relationship, Nicole walked away from her friendship with Rafe. She could have done this by just keeping busy with work instead of loudly announcing it to Rafe. Nicole wanted Rafe to pursue her. He wouldn’t be chasing after her if she just seemed busy with work. So, she gave him a reason and that’s exactly what he is doing despite holding onto Ava.

Days Of Our Lives Spoilers – Plan Working Like A Charm

Days of Our Lives spoilers reveal that when Rafe kept denying his feelings, Ava went to Nicole. She told Nicole that she wants to be with Rafe and he feels the same way. Ava offered to walk away from the romance so “Racole” could be together. However, Nicole didn’t take Ava up on the offer. It would be too anticlimactic for Nicole. When she gets a new or rekindled relationship, it’s always surrounded with chaos. Ava’s idea wouldn’t provide enough drama for Nicole.

What Nicole is doing now is creating distance so Rafe will continue chasing her. People always want who they can’t have. Salem is a small town so Nicole and Rafe will run into each other. Plus, all Rafe can do is talk about Nicole, which must get on Ava’s nerves.

Imagine being on a date with your significant other and they spend the entire evening yapping about another woman? That’s exactly what happened when Rafe and Ava went out to dinner. Nicole just happened to be on a date with EJ DiMera (Dan Feuerriegel) at the time. Not only is Rafe reacting to the sudden distance between himself and Nicole, but now the woman he wants is dating an enemy.

Nicole has played this scheme before. Rafe is playing right into Nicole’s manipulative hands. Meanwhile, Nicole looks innocent as she’s not actually doing anything to get between Rafe and Ava. It also makes it a lot easier to play the “fate” card.

Days Of Our Lives Spoilers – Gabi Hernandez Gets Her Way

Gabi Hernandez (Camila Banus) “proves” Ava is evil, but only because of Rafe toying with her heart while Nicole plays the overused “chase me” game. By the time Rafe and Nicole become a couple, Ava will reach her breaking point with Gabi. Rafe will be “horrified” and thinks he was played. What Rafe doesn’t realize is Gabi “exposes” Ava the moment she gets fed up and fights back.

In the end, Ava will just feel mistreated by Rafe, used by Nicole and set up by Gabi… which will make her realize that being good just isn’t worth the pain.