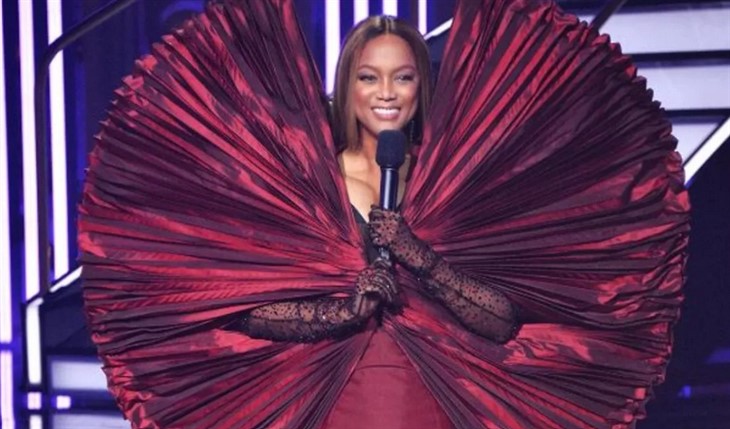 In an appearance on The Late Late Night Show with James Corden, Tyra Banks defended the unique look she rocked for Monday’s episode of Dancing with the Stars.

According to Banks, she first thought the dress looked like a “peacock” until it went viral and fans eagerly commented that it closely bears a resemblance to Jurassic Park.

Tyra Banks is the Queen of risky fashion, that is, on a day when Rihanna decides to take the day off. The 47-year-old model went viral for the dress with a dramatic collar she wore mid-episode of DWTS.

During a chat with James Corden, she defended the dress, which drew comparisons with “Jurassic Park” by some online critics.

Banks, who has been hosting DWTS since season 29, told Corden, 43, that her stylist knew how the dress made her look before she stepped out on stage.

“I kept saying ‘peacock’ after [putting on the dress] and my stylist kept on kind of giggling and stuff,” the model explained. “and then we started seeing all this Jurassic Park stuff [online].”

She later added: “My stylist was like, ‘Yeah we did know that you looked like a lizard before the social started.’ They did know!”

Banks, however, is not bothered by the critics or what they’re saying about her adventurous outfit. In fact, she revealed that she wears them for the very purpose of calling people’s attention to its unusual design.

“Different is what? Better,” Banks told Corden. “I don’t have time to be normal in a pretty dress, because nobody is going to say anything about a pretty dress. You’ve got to push it and go for it.”

Banks previously shared the inspiration behind the dress with E! News’ Daily Pop, comparing its trailblazing collar to Victoria’s Secret wings – or “wangs”, as she would rather call them.

“There’s a base of that dress. It looks like a normal, beautiful dress from the ’90s,” Banks said of the viral look. “Then I go on the stage in front of the audience and everybody, and I put on the wing thing. And everybody was like, ‘Oh!’ because they thought the first thing was the normal dress.”

Dancing With The Stars Spoilers – Season 30 Of Dancing With the Stars Airs Mondays At 8 p.m. ET.

Be sure to catch up on everything happening with Tyra Banks right now. Come back here often for all Dancing with the Stars spoilers, news, and updates.