Days Of Our Lives (DOOL) Spoilers: Gwen And Abigail Take Charge Of Their Destinies 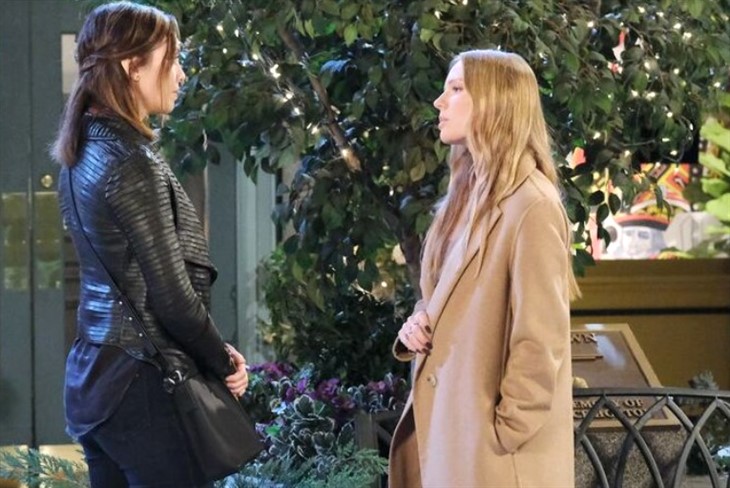 Days of Our Lives (DOOL) spoilers and updates tease Abigail Deveraux DiMera (Marci Miller) is looking toward her future. Abigail had been feeling guilty about a fight that she had with her sister Gwen Rizczech (Emily O’Brien). Abigail believed that Gwen was pregnant with Abigail’s husband Chad DiMera’s (Billy Flynn) child at the time of their fight. Gwen fell down the stairs at the DiMera mansion.

Abigail believes that Gwen lost her baby because of the fight. Gwen has been keeping the secret that she had lost the baby before her fight with Abigail. Gwen does not want to lose the love and acceptance that she has gotten from her father Jack Deveraux (Matthew Ashford). She is terrified that he will be disown her if he finds out that Abigail did not cause her to lose her child. Abigail wants to out the past behind them. Gwen and Abigail have decided that they want to move on and embrace their future.

Abigail had a conversation with Johnny DiMera (Carson Boatman). Johnny wants to make a movie about the time that his grandmother Dr. Marlena Evans (Deidra Hall) was possessed by the devil. Abigail was surprised that Johnny by the subject of the movie. Johnny wants Abigail to play Marlena in his movie. Abigail has decided to play Marlena.

She feels that she can bring her own experience to the movie because she has been able to overcome her dissociative identity disorder (DID). Abigail told Chad that she wants to play Marlena in Johnny’s movie which surprised him. Chad can see that Abigail is serious about playing Marlena. Chad has wanted Abigail to find something that could make her happy. He has felt badly about what happened with Abigail and Gwen.

Gwen has found that she may be falling in love. Gwen has been getting closer to Xander Kiriakis (Paul Telfer). Xander has been helping Gwen to keep her secret in order to hold on her relationship with Jack. Xander has found himself in legal trouble because he had covered for Gwen when Jack found out that Dr. Clay Snyder (Michael Lowry) had been blackmailing Gwen to get her to work for him on his illegal drug operation.

Xander helped Gwen to get rid of Snyder’s body when he had a heart attack after he threatened Gwen. Gwen has been overwhelmed by the support that she has gotten from Xander. Gwen is determined to help Xander get out of his legal problems. She has started to want to have a future with Xander.

Days of our Lives Gwen has not thought that she may want to have a relationship with Abigail. Gwen does not know what Abigail with think of her if she finds out that she lost the baby before the fight. Will Abigail be angry with Gwen for keeping the secret or will she forgive her? Gwen wants to hold on the love that has with Jack and Xander. Can Gwen keep the relationships that are important to her?

Abigail wants to move on with her life. She is excited by the idea of working with Johnny on his movie. Will Abigail become the star she wants to be? Chad will want Abigail to be happy again. Will Chad find a way to support Abigail to realize her dream? Abigail may decide that she wants to get close to Gwen because she has found something that has fulfilled her life. Can Abigail and Gwen find a way to become sisters?