General Hospital (GH) Spoilers: Esme Holding Something Over Spencer To Make Him Behave? 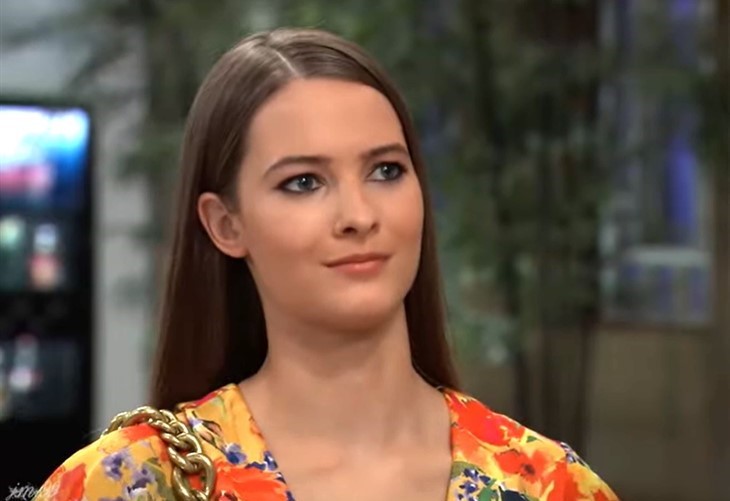 General Hospital spoilers and rumors tease Esme Prince (Avery Kristen Pohl) has a secret she’s holding over Spencer Cassadine (Nicholas Chavez) to make him behave, and it will all be revealed in upcoming episodes of General Hospital!

General Hospital Spoilers And Rumors – Spencer Cassadine Is Not The Most Honest Person, Even As A Child

Longtime General Hospital viewers will recall that Spencer has not been the most honest person, not even as a child! When his grandmother Laura Collins (Genie Francis) was running for mayor of Port Charles, a pre-teen Spencer managed to insert a virus into the machines at the polling place, and even got ahold of some of the legitimately filled out ballots and sunk them to the bottom of the ocean in a heavy box! To this day, neither Laura nor Ned Quartermaine (Wally Kurth) who she was running against, know the truth!

Longtime General Hospital viewers will also remember a young Spencer finding at least one diamond from the ones that Hayden Barnes (Rebecca Budig) had that she had stolen from her father, Raymond Berlin (Robert Curtis Brown) in Wyndemere Castle and keeping it! More recently, General Hospital viewers have noted that Spencer seems to act differently when Esme is present than he does when she is not, and she certainly seems to have something she’s using as leverage over him. It’s plain that if Spencer and Esme are considered a family of sorts, she’s wearing the pants and pulling the chain!

General Hospital viewers will recall that before Spencer showed up in Port Charles, and later Esme, that the last time he was seen was when Nikolas Cassadine (Marcus Coloma) and Ava Jerome, now Ava Jerome Cassadine (Maura West) came to see him at his boarding school in France. He seemed to be a studious, if angry student back then but there was no hint of a girlfriend and he actually acted less angry at Ava than he did at Nikolas at that time. This was when he first found out that his father wasn’t dead after all, and Ava was trying to help make peace between father and son.

But Spencer’s anger has always been understandable – Nikolas kept him out of the loop the second time he was presumed dead for several years. Spencer knew his father was faking his death the first time, but not the second time after he was shot by Valentin Cassadine (James Patrick Stuart) and fell out a window at Cassadine Island. Esme must have connected with him after that visit. General Hospital viewers know all kinds of things could have happened since then!

General Hospital Spoilers And Rumors – What Could Esme Prince Be Holding Over Spencer Cassadine?

It seems odd to General Hospital viewers that during the time Nikolas was roaming all over Europe with Hayden Barnes that not even once did any sightings make their way back to Spencer! It was even revealed that Nikolas had been the one who was driving Cassandra Pierce, (Jessica Tuck) a known drug dealer and criminal, from a medical facility in Canada intercepting her from being returned to a WSB medical facility where she was supposed to be. If she had not been intercepted, then Sasha Gilmore (Sofia Mattsson) would not have nearly died from the bird flu!

General Hospital viewers will recall that Cassandra made all kinds of trouble before ultimately being blown up in a dinghy by Valentin, after she kidnapped Charlotte Cassadine (Scarlett Fernandez)! One thing springs to mind – Spencer’s going by the name Victor when he first came to town. Now it has been revealed Victor Cassadine (Charles Shaughnessy) is alive and has been for several years – perhaps the secret Esme’s holding over Spencer to make him “behave” is that not only did Spencer know he is alive, but perhaps did some work for him while in France! Nikolas may have known of his great-uncle’s survival as well!