The Bold And the Beautiful (B&B) Spoilers: Quinn Can Not Let Carter Go – Stay With Eric Temporary? 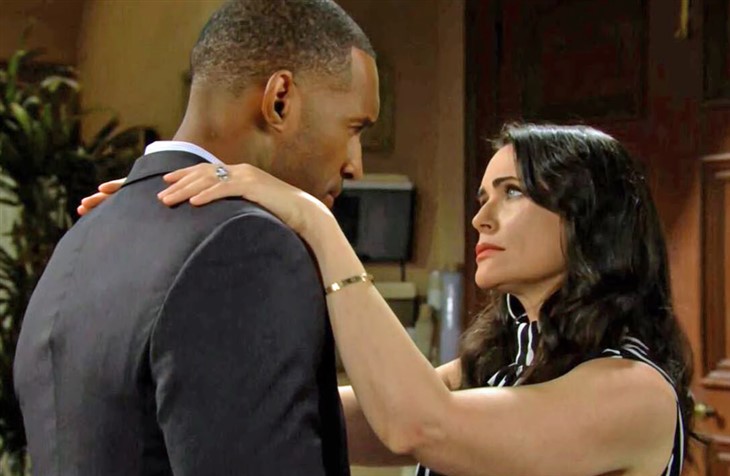 The Bold and the Beautiful (B&B) spoilers document that Quinn Fuller (Rena Sofer) loves her husband. Because she also feels sorry for him, the teased ultimatum Eric Forrester (John McCook) offers projects as being accepted, meaning that Queric survives.

Fans knew that Eric’s heartfelt but misguided plan could not endure. The secret that was meant to stay between him, Quinn, and Carter Walton (Lawrence Saint-Victor) could not remain buried in this setting that is infamous for gossip.

So, Quinn is projected to stop Quarter. Carter will understand but be emotionally devastated. However, this decision feels temporary for two reasons.

Eric’s ED problem is not destined to persist forever. He has embraced a fatalistic outlook and is pitying himself.

That is reflective of the lavish praise Eric has often received. While he is a forgiving guy, McCook’s character is no saint. He came to believe the press about himself and was not able to handle the consequences of the issue he has developed.

Ridge spotted his dad’s lack of self-confidence weeks ago. He tagged Quinn as the problem and was partially correct.

Quinn should have never sought Carter out as a confidant. That led to him becoming her romantic alternative. Now, she has fallen in love with him.

The above implies that Quarter could be Quinn’s destiny rather than a diversion. Her me-first outlook on life has kept her from advancing past a high schooler’s view of reality.

While it is a harsh conclusion, Ridge and Brooke Logan Forrester (Katherine Kelly Lang) are not wrong about Quinn being a negative force in Eric’s life. He vehemently disagrees because he remains lovesick, with that term being loosely applied.

The Bold And The Beautiful Spoilers – Being With The Right Person

Eric has enabled Quinn with his Yes, Dear nonsense. He has played down to her juvenile behavior. Doing so has come back to bite him.

Viewers can relate to how it feels when one’s spouse is the right pick. Sure, life has its moments, but that person is there for you during times of conflict.

Where was Quinn when Eric was home alone in recent weeks? She was with Carter, with both halves of Quarter rationalizing that Eric’s approval was an endorsement. It was not that. Instead, it was a cry for help that they ignored.

Everyone in this trio, not just Eric or Quinn or Carter, but all three people, need to look at themselves in the mirror and make adult decisions that respect all involved.