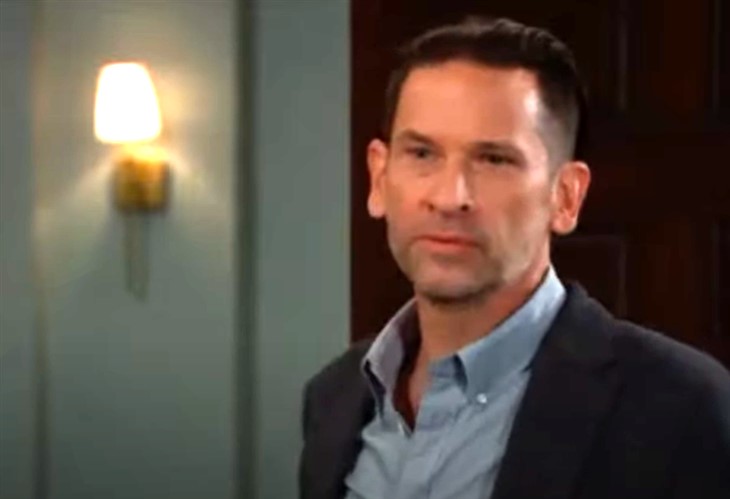 General Hospital spoilers tease that Austin Gatlin-Holt (Roger Howarth) will have a warning for Maxie Jones (Kirsten Storms) in an upcoming episode of General Hospital!

General Hospital viewers will recall that Austin has been nothing but caring and protective of Maxie since coming to Port Charles and landing a job at General Hospital. Austin has felt terrible that he could not have prevented the kidnapping of baby Louise August (Harper and Scarlett Bloom) after he delivered her out in the woods outside of Pawtuck, New York when he came across Maxie in labor as he was hiking. Of course, it wasn’t his fault that the fake nurse that Peter August (Wes Ramsey) hired knocked him out with a fire poker!

While he was unconscious, Brook Lynn Quartermaine (Amanda Setton) arrived to pick up the baby from Maxie, so as viewers will recall there was no actual kidnapping. But to keep her safe, that was the plan. It benefitted both Maxie and Brook Lynn, although they didn’t think beyond the point of Brook Lynn pretending the baby was hers and Valentin Cassadine’s (James Patrick Stuart) and Brook Lynn naming her Bailey Lois Quartermaine!

General Hospital viewers will have noticed that Brook Lynn has become increasingly vitriolic about and against Austin in recent episodes of General Hospital! There may be more reasons than just her perception that Austin is an interloper and not a real Quartermaine – after all, the same thing could be said about a few others who were accepted.

Skye Quartermaine, (Robin Christopher), the Wards, and even Jason Morgan (Steve Burton) and Drew Cain (Cameron Mathison) to name a few – all were products of Quartermaine family member affairs! Brook Lynn knows that if Austin gets too close and too involved in the Quartermaine family affairs, he could figure out that Bailey isn’t really hers and Valentin’s, and that could spell disaster should Peter August (Wes Ramsey) not be captured! General Hospital spoilers say Brook Lynn will take something to the next level, and it could be her campaign against Austin!

General Hospital viewers can imagine that if Brook Lynn can be that vitriolic against Austin, he may worry she’ll go off on Maxie! The fact that Maxie is around Brook Lynn and “her baby” quite a bit is not lost on Austin, and he’s noticed a few times when they’ve been at General Hospital together.

Austin knows that Maxie has been through enough pain and he would spare her from any more if he possibly can. It is completely understandable that Maxie would want to hang around a baby the same age and sex as her missing Louise, although he can also understand the dangers in her getting too attached to a baby that (supposedly) isn’t hers! After a particularly intense experience with Brook Lynn’s big mouth, Austin will warn Maxie that perhaps she should be careful around Brook Lynn and avoid any misunderstandings over the baby!