The Bold And The Beautiful (B&B) Spoilers: Eric Reverses Course, Makes A Heartbreaking Demand Of Quinn 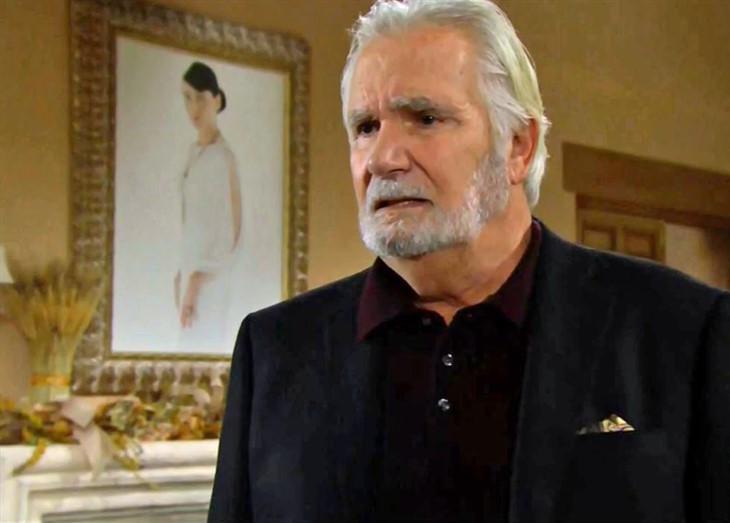 The Bold and the Beautiful (B&B) spoilers and updates tease that Eric Forrester (John McCook) will make a heartbreaking demand of Quinn Forrester (Rena Sofer). It appears like Eric is no longer willing to share his wife. He’ll give her an ultimatum and make her choose between him and Carter Walton (Lawrence Saint-Victor).

Fans may recall that Eric took Quinn back and came up with an unusual arrangement with her and Carter. Unfortunately, this arrangement has placed a heavy burden on Eric given that he can’t satisfy the passionate desires of his wife because of his erectile dysfunction.

Not only that, it will dawn on him with the help of Katie Logan (Heather Tom) that he has other issues aside from failing to meet Quinn’s needs. Furthermore, Ridge Forrester (Thorsten Kaye) and Brooke Forrester (Katherine Kelly Lang) will pressure him to end the arrangement because they believe Quinn is taking advantage.

The Bold And The Beautiful – Eric Forrester Delivers Ultimatum

Eric will reconsider his situation with Quinn and come up with a new demand. He’ll deliver an ultimatum that will upset his wife. He may understand that she’s in a tough position at the moment, given that he was the one who put her there.

Eric may tell Quinn that he can no longer tolerate their polyamorous arrangement. It was his idea to let Quinn turn to Carter to find fulfilment. He may feel sorry for that. He’ll understand if Quinn decides to leave him and be with Carter.

But if she decides to stay, he’ll expect her to be faithful to him. He knows it’s a big ask but he no longer wants to subject himself to the pain he felt knowing that his wife was spending passionate evenings with another man just because he can’t fulfill her desires.

The Bold And The Beautiful Spoilers: Eric Forrester Struggles After Secret Revealedhttps://t.co/9mnfuYMoju

Quinn may decide to choose Eric over Carter. She has deep romantic feelings for Carter but she loves her husband, too. Although it’s a painful choice that she has to make, Quinn can’t leave Eric especially now that he’s dealing with ED. She’ll bid Carter farewell once again. The latter will be heartbroken over Quinn’s decision to stand by Eric. But Carter will put on a brave face and accept that whatever he had with Quinn is now over.