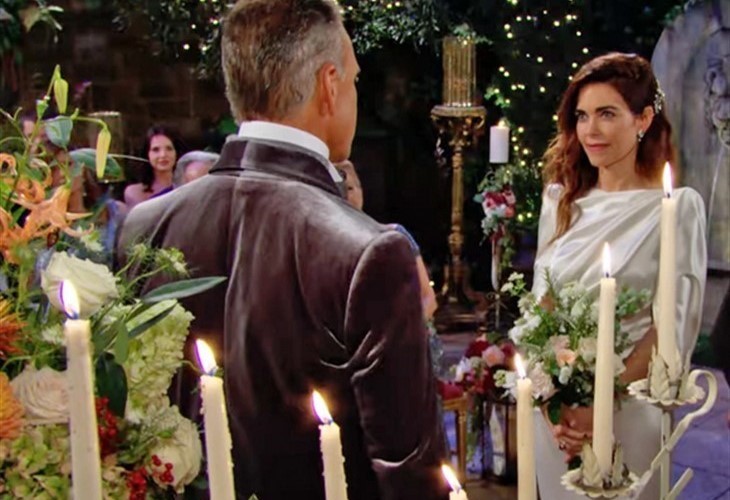 The Young and the Restless spoilers document that the wedding event of the year arrives this week in Tuscany, Italy. Victoria Newman (Amelia Heinle) is bound and determined to marry the man she only recently came to know.

Ashland Locke (Richard Burgi) is not in good health but has cleared his conscience in recent weeks on two occasions. His earlier tell about being Bobby Defranco was followed by an awful story. He admitted to being part of an inheritance fraud that led to him creating the Locke Communications Group.

Victoria is backed by her parents, but not by her brother or ex-husband. Nick Newman (Joshua Morrow) and Billy Abbott (Jason Thompson) are very concerned about the new queen of Y&R, Victoria. Whether Ashland proves worthy of sustaining the king title is yet to be seen.

The Young And The Restless Spoilers – Gorgeous Setting Seen In Daytime

The set designers outdid themselves. This soap has long been known for creating some of the most beautiful sets in daytime.

Now, the setting of the wedding, which is said to be Victor Newman’s (Eric Braeden) Palazzo in Tuscany, Italy. By definition, this large, imposing building has exceeded expectations.

Resplendent images are radiant on the screen. Wonderful background touches that include black and white Newman family photos. A full round of applause is due to all who worked hard to design and create this memorable setting.

An extended buildup took place in the weeks preceding the October nuptials. Victoria was attempting to run out the clock, as forces of doom continued to call to her. However, she agreed to travel ahead of the wedding party and guests to Tuscany.

Ashland’s tormented tale about Camilla Rhodes (no actor known to be cast for this retrospective role) left Victoria reeling, but she did not break. Heinle’s character has proven to be most like the Newman patriarch, both at Newman Enterprises and in her personal life.

The Young And The Restless Spoilers – Victoria Newman Locke Gets What She Wants?

Teaser scenes inform the audience that the wedding day will happen. Sally Spectra’s (Courtney Hope) impressive gown will be worn. Ashland will be standing at the altar, along with all the players in attendance.

Jesse Gaines (Jamison Jones) seems to have been neutralized, much to Billy-boy’s chagrin. Nick is confounded by Victoria rationalizing who Ashland is and that their parents would support Vashland.

So, Victoria and Ashland appear to get what they want. But Ashland’s health appears to be progressively declining. So, will a honeymoon or devastating heartbreak follow?