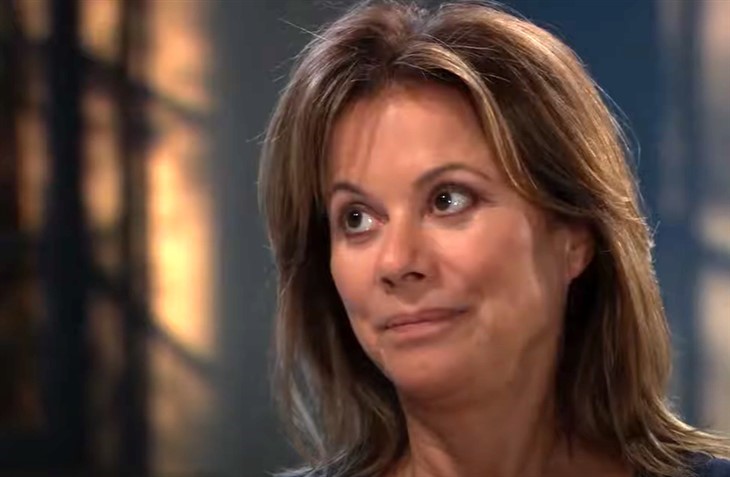 General Hospital (GH) spoilers and updates tease Alexis Davis (Nancy Lee Grahn) has been concerned about the ones that she cares about. Alexis has been in Spring Ridge after she accidently attacked Dante Falconari (Dominic Zamprogna). Alexis has been doing what she can to help her loved ones. She has been concerned about her nephew Nikolas Cassadine (Marcus Coloma). She has also been worried about her friend Shawn Butler (Sean Blakemore). Alexis has wanted to help them with their problems.

Alexis has tried to help Nikolas find out who has been stalking him and his wife Ava Jerome-Cassadine (Maura West). Alexis and Nikolas believed that Ryan Chamberlain (Jon Lindstrom) could be the stalker but he has locked in syndrome. Nikolas found out that his son Spencer Cassadine (Nicholas Chaves) is the stalker. Spencer decided to confess that he was the one who was threatening Ava. Nikolas is angry with Spencer and has told him to leave home. Alexis will be upset about Nikolas and Spencer having a falling out.

Alexis may tell Nikolas to give Spencer a chance to make amends. She may remind Nikolas that he tormented Ava in the past. Ava believed that she was going insane and checked herself into Shadybrook. Nikolas used the memory of Ava’s daughter Kiki Jerome (Hayley Erin) against her which is similar to what Spencer did when he gave Ava’s other daughter Avery Jerome-Corinthos (Ava and Grace Scarola) a teddy bear with Ryan’s voice in it. Alexis may tell Nikolas that he has not always done right by Ava and should be compassionate to Spencer.

Alexis has been trying to help Shawn to find out who framed him for shooting Hayden Barnes (Rebecca Budig). Shawn had been working with Sam McCall (Kelly Monaco) and Commissioner Jordan Ashford (Briana Nicole Henry) to clear his name. Jordan was seriously hurt when she was following a lead on the case. Alexis will want Shawn to be careful if he continues to try to find out who shot Hayden. Alexis helped Shawn to find out that that his case has a connection to Victor Cassadine (Charles Shaughnessy). Alexis is worried that Shawn may get into danger because Victor is a dangerous man. Alexis may remind Shawn that he is a father and needs to make sure that his son TJ Ashford (Tajh Bellow) is safe. TJ is important to Alexis because he is her daughter Molly Lansing-Davis’s (Haley Pullos) domestic partner. Alexis may tell Shawn that he needs to stop his investigation.

General Hospital Alexis wants to support Nikolas and Shawn. Alexis does not want Nikolas to push Spencer away completely. Can Alexis find a way to help to keep Nikolas and Spencer together as father and son? Alexis is concerned about Shawn and does not want him to get into danger. She may tell Shawn that he is now the only parent that TJ has to turn to because Jordan had to leave Port Charles for medical treatment. Can Alexis convince Shawn to give up his investigation for TJ? Alexis and Shawn have become close. Will Alexis tell Shawn that he is too important to her for her to lose? Be sure to catch up on everything happening with GH right now. Come back here often for General Hospital spoilers, news, and updates.