The Bold And The Beautiful Spoilers: Sheila’s Plan Is Ominous – All Hail Kimberlin Brown And Sean Kanan 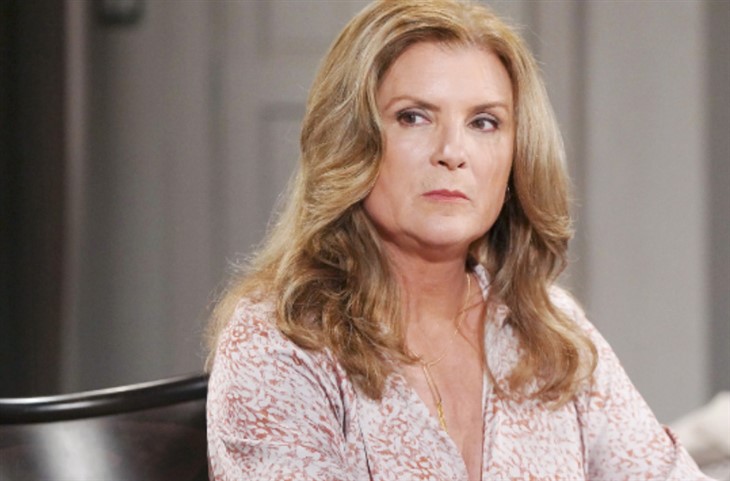 The Bold and the Beautiful spoilers document that fans know that one all-time villain means chaos is ahead. But pairing two villains projects to great soap.

Sheila Carter’s (Kimberlin Brown) most recent comeback was initially a solo effort. That left some fans wondering what would be different?

Enter Deacon Sharpe (Sean Kanan) at the cabin. His appearance there and later, at the bar with Sheila, delighted many hardcore daytime fans. Yes, this duo is instantly dynamic.’]

The idea of team these talented actors was inspired. Kudos to TPTB for making the joint comebacks of Brown and Kanan happen.

Sheila is, without a reasonable counterargument, the greatest villain in B&B’s history. Deacon ranks as one of the most memorable personalities during the time that he has been seen in this version of Los Angeles, California.

B&B Spoilers – Forrester’s Are The Target

Deacon’s momentary resistance to Sheila’s call for them to combine forces was resolved by desperation and logic. As Sheila said, Steffy Forrester Finnegan (Jacqueline MacInnes Wood) is preventing her son from having the relationship he wants with her. Brooke Logan Forrester (Katherine Kelly Lang) is doing the same with Hope Spencer (Annika Noelle) regarding Deacon.

So, the objective appears to be clear. Sheila intends for her and Deacon to destabilize Steffy and Brooke. But how will that happen?

Deacon’s instinct was right. Teaming with Sheila will not help him long-term. Hope will likely reject him if she learns that he has thrown in with Brown’s character. So, that alliance would seemingly need to be cloaked.

The Bold And The Beautiful Spoilers – Pitting People Against Each Other

Steffy feels secure in her husband. She believes that John Finn Finnegan (Tanner Novlan) accepts and supports her stance, meaning that Sheila can not be allowed to have contact with the Sinn family.

The Bold And The Beautiful Spoilers: Deacon And Sheila’s Pact, Kimberlin Brown On Partnershiphttps://t.co/C7Xx9Rzeyb

Sheila knows that Finn has an emotional connection with her that comes from the questions he has had about his birth mother since he was a child. Hope’s letters, her invite to the cabin upon his release from prison, and defense of him in front of Bridge and Liam Spencer (Scott Clifton) allow Deacon to know that his daughter loves him.

Steffy and Brooke are considered the main problems. Talking will not create progress. So, actions will need to be taken by Sheila and Deacon as the next great storyline unfolds on B&B.