Days Of Our Lives (DOOL) Spoilers: Justin Encourages Bonnie Lockhart Not To Give Up Hope 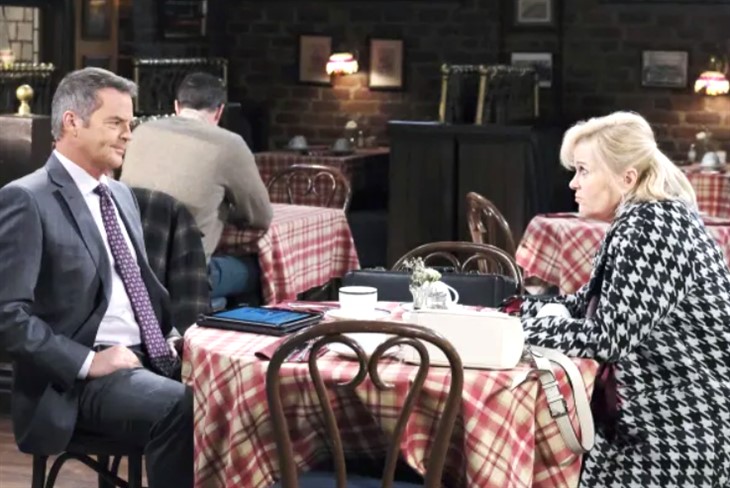 Days of Our Lives spoilers tease that even as Victor Kiriakis (John Aniston) negotiates with Melinda Trask (Tina Huang) for his nephews’ release from jail, Justin Kiriakis (Wally Kurth) will encourage Bonnie Lockhart (Judi Evans) not to give up hope in an upcoming episode of Days of Our Lives!

Days of Our Lives viewers will recall that Bonnie is accused of murder and larceny – larceny of the one million dollars of EJ DiMera’s (Dan Feurreriegel) that Xander Cook (Paul Telfer) had ready to return to him, and murder of Calista Lockhart (Cady Huffman) who forced Bonnie to steal it for her! Xander, Gwen Rizchech (Emily O’Brien) and Justin came up with a plan involving what constituted blackmail of Judge Robert Smails (Richard Steinmetz) to vacate Bonnie’s charges, but it all backfired on all three of them horribly.

Gwen became Bonnie’s cellmate, Xander stayed jailed and Justin became jailed! Days of Our Lives viewers know everything seems pretty hopeless for all of them, but Justin’s staying positive and trying to keep Bonnie’s spirits up as well as he can, considering the circumstances! He knows that his Uncle Victor has been around the block a time or two, and knows his way around the legal system! If anyone can turn this mess around, Victor can!

Days of Our Lives viewers can imagine that Bonnie just feels even worse after she finds that Justin is in jail for trying to help her get out of jail, in addition to Xander! Then she learns more from her new cellmate Gwen and that she was in on the backfired plan as well. Days of Our Lives viewers know that Bonnie, who has tried so hard to redeem and reform herself, only to have her dreams dashed in her face when her scheming ex sister in law ruined everything on her wedding day, now blames herself for it all! Bonnie was actually defending herself against Calista when the gun went off and killed her instead, but she has no proof, only her past bad behavior.

Bonnie doesn’t seem to be able to put her past behind her no matter how hard she tries, and that is all she can think about. Bonnie has pretty much given up hope of being released, let alone being Mrs. Justin Kiriakis!

Days of Our Lives viewers can expect that Justin will tell Bonnie that his uncle is working on getting everyone freed, and not to give up hope. Justin and Xander told Victor about the corrupt judge and getting him out of the picture may go a long way towards getting her freed as well. Justin urges Bonnie to be patient and promises they will be able to get married and put all this behind them.

He isn’t going anywhere, and fully intends to go through with their wedding when they are able to. Days of Our Lives viewers know that Victor has a big messy knot to untangle, and District Attorney Melinda Trask is not easy to convince; but Victor may be able to get something or someone Melinda wants to get her to make a deal!