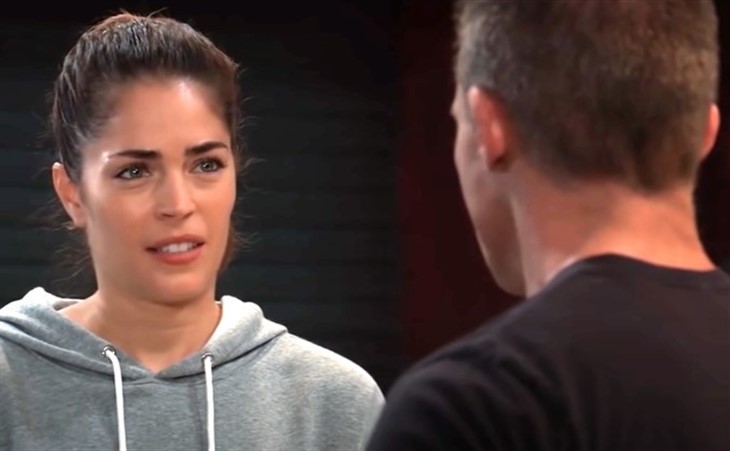 General Hospital viewers will recall that Britt has decided to let Jason help look for her Mutti (German for “mommy”). Scott Baldwin (Kin Shriner) made a pretty compelling case for reaching out to Jason in a recent episode of General Hospital. Britt didn’t want to admit it because she was still upset and hurt at Jason’s sudden exit from their relationship to “marry his best friend” as she put it to Scott.

Jason had offered to help her find Liesl Obrecht (Kathleen Gati) as soon as he heard about the plane that dumped Scott near the campsite of Dr. Hamilton Finn (Michael Easton) and Nurse Elizabeth Baldwin (Rebecca Herbst) but no Liesl! But at the time, Britt was too upset and just wanted space from Jason. Britt was also upset that Anna Devane (Finola Hughes) didn’t have any information the day that Scotty talked to her about getting Jason involved – but as General Hospital viewers will recall, Valentin Cassadine (James Patrick Stuart) had gone missing!

General Hospital viewers will recall that Britt weighed her options and decided Scotty was right – Jason might be the best person to help her find Liesl! Jason wants all the details, no matter how small or unimportant they may seem. General Hospital viewers can imagine that Jason won’t be surprised at the assumption that Peter August (Wes Ramsey) may be behind it.

Jason recalls how his presumed dead twin Drew Cain’s (Cameron Mathison) plane went down as well as Holly Scorpio’s, (Emma Samms). Jason knows about Holly’s situation from being on the periphery of the “Quartermaine hotline” visiting Danny Morgan (Porter Fasullo) at the mansion and hearing it talked about. Scott gives Jason any details that Britt doesn’t know about, although he had already told her most of it anyway. Jason ponders how best to start a search for the missing Liesl.

General Hospital viewers will recall that Anna is in Greece, where she was following up on leads on Drew. Robert Scorpio (Tristan Rogers) also showed up looking for Louise August, (Harper and Scarlett Bloom) Maxie Jones’ (Kirsten Storms) and Peter’s missing baby girl. Anna had been with Robert when they found out Valentin was missing, and General Hospital viewers will recall that Valentin had been kidnapped by Victor Cassadine (Charles Shaughnessy) and thrown in the cell with Drew!

Prior to Victor having him brought to him, Valentin learned from Drew that Liesl was also there in the compound. As Britt and Jason are talking about where to start, Anna calls. Valentin has been located and freed and has told Anna that Liesl is in the same compound as Drew – and Victor Cassadine! The disturbing news is, Valentin doesn’t know where she is and Peter August is on the loose!