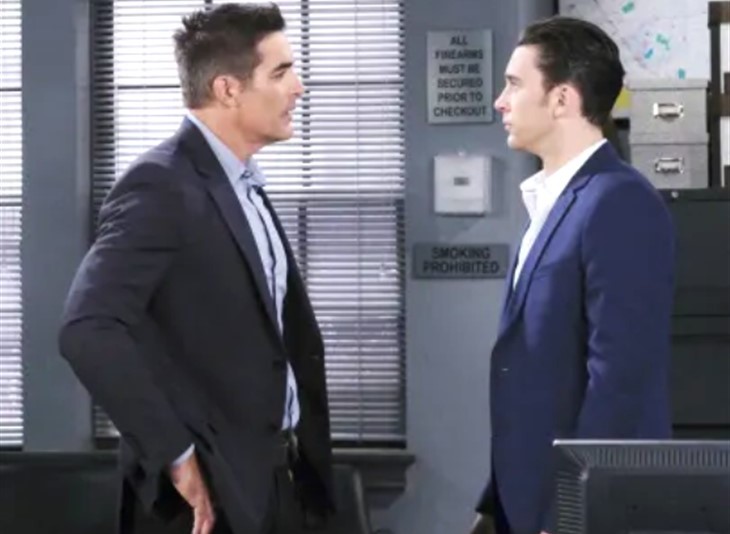 Days of our Lives (DOOL) spoilers and updates tease EJ DiMera (Daniel Feuerriegel) has found a way to make a few enemies. EJ has been trying to get over being betrayed by his wife Sami Brady DiMera (Alison Sweeney). He decided to go on a date with Nicole Walker (Arianne Zucker). He has wanted to get close to his son Johnny DiMera (Carson Boatman).

He wanted Johnny to join him in their family business DiMera Enterprises. Johnny wanted to make a movie about the time that his grandmother Dr. Marlena Evans (Deidre Hall) was possessed by the devil. Johnny has asked Abigail Deveraux DiMera (Marci Miller) to play Marlena. Abigail was unsure if she wanted to part at first but has decided that she wants to be in the movie.

EJ found out that his brother Chad DiMera (Billy Flynn) decided to help to fund Johnny’s movie. He was upset with Chad because he wanted Johnny to give up his desire to be a filmmaker. EJ has found out that Abigail is going to be playing Marlena. Chad wants to play Marlena’s husband and longtime love John Black (Drake Hogestyn) in the movie.

He believes that it will bring him and Abigail back together again. Chad and Abigail had been having trouble with their marriage. Johnny told EJ that Roman Brady (Josh Taylor) had decided not to help him fund the movie. EJ told Johnny that he would help him if he could be the one to play John. Chad will be upset to find out that EJ will be playing John if EJ helps to fund Johnny’s movie.

EJ and Nicole were out on their date when they encountered Rafe Hernandez (Galen Gering) with his girlfriend Ava Vitali (Tamara Braun). Rafe was stunned to see Nicole with EJ. Nicole has been trying to get over losing her husband Eric Brady (Greg Vaughan). Nicole had turned to Rafe for comfort but Ava was getting jealous of the time that Rafe and Nicole were spending together. Nicole did not want to come between Ava and Rafe.

Nicole told Rafe that she did could take care of herself. EJ has needed Nicole to help him to deal with Xander Kiriakis (Paul Telfer). Nicole reluctantly helped EJ because she does not like Xander. Nicole has tried to help EJ with his problems with Johnny. Nicole has started to see another side to EJ and may want to pursue a relationship with him. Rafe was concerned about Nicole getting close to EJ. He may believe that EJ will hurt Nicole.

Days of our Lives EJ could have a problem with Chad and Rafe. Chad may try to find a way to get to take away the part in the movie from EJ. Chad may create a problem at DiMera Enterprises which could cause EJ to have to give up the part. Will Chad try to sabotage EJ in some way? Rafe does not want Nicole to date EJ.

Will Rafe try to take Nicole away from EJ? Chad and Rafe may find that they have a common enemy. Will Rafe and Chad try to take down EJ in some way? Be sure to catch up on everything happening with DOOL right now. Come back here often for Days of Our Lives spoilers, news, and updates.