General Hospital (GH) Spoilers: Britt And Jason Reconcile, Forces Him To Choose Between Her And Carly? 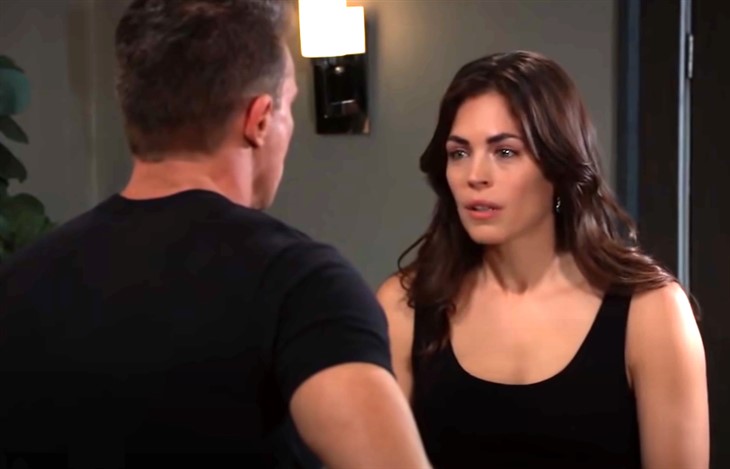 General Hospital viewers will recall that Carly Corinthos made a rather snarky pitch to Britt in a recent episode of General Hospital regarding Jason. She told Britt that now that Sonny Corinthos (Maurice Benard) is back, the marriage to Jason is invalid, and they planned to go back to what they were before Sonny went missing. However, Carly made sure that Britt knew that more happened between her and Jason and although the marriage started as a business arrangement, if Sonny had not returned it would have been a real marriage, “with all the bells and whistles”!

General Hospital viewers will also recall that in any friendship or relationship that Jason has ever had with a woman, Carly was always part of the package as his best friend; but that will stop when Britt reconciles with Jason! Britt is grateful to Carly for donating her blood to save Jason’s life, she herself had performed the transfusion in less than perfect circumstances in one of the Corinthos safe houses. But she won’t share her man with a female “best friend”!

General Hospital viewers will recall that it took quite a bit of pride-swallowing for Britt to agree to call upon Jason and take him up on his offer to help her find her missing mother! General Hospital viewers will recall that Liesl Obrecht (Kathleen Gati) had been on the way to St. Lucia for a symposium on Huntingtons’ Disease with Scott Baldwin (Kin Shriner) when the plane was hijacked and Scott was dumped out of the plane. Liesl, in the meanwhile disappeared. Liesl had intended that Peter August (Wes Ramsey) go to St. Lucia, where she was going to kill him – she didn’t tell Scotty that part! But it turned out that Victor Cassadine (Charles Shaughnessy) had set up the whole thing!

General Hospital Spoilers And Rumors – There Was No Symposium, It Was All A Set Up!

General Hospital viewers will recall that Liesl soon found there was no symposium in St. Lucia, and while a drugged Scott found himself in the middle of Dr. Hamilton Finn (Michael Easton) and Nurse Elizabeth Baldwin’s (Rebecca Herbst) campsite, a drugged Liesl found herself redressed in silk pajamas and in a nicely appointed bedroom! She soon found out that Victor not only didn’t die from her gunshot back at the Crichton-Clark Clinic, which had exploded, he wasn’t a crispy critter like she thought he was either! General Hospital viewers will see that Jason and Britt get a lead that Victor is alive and has Liesl, and head for Cassadine Island, the most likely place for Victor to have a compound!

General Hospital viewers will recall that Britt and Jason fell in love on the run in Canada, and they will reconcile on the Greek rescue mission of Liesl. Jason will want to make it up to Britt for hurting her so badly, and he puts all he has into finding Liesl and bringing her home safely.

But he will also explain his side of why the marriage between himself and Carly had taken place – and that it was to save Carly’s life. Britt will scoff at first, as she did when Carly explained things to her, knowing “the business” always came first. But things will get real for Jason when Britt lays down some ground rules if he wants to be with her – for one thing, she’s not sharing him with Carly, best friend or not! Britt will make it crystal clear to Jason that he will have to make a choice; be with her and her alone, or stay in the strange triangle of Carly, him and Sonny! There will be no in between!