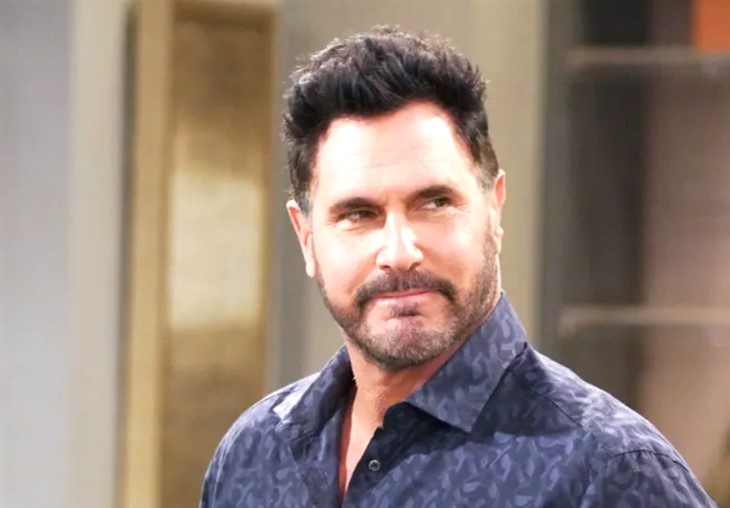 The Bold and the Beautiful (B&B) spoilers document that Eric Forrester (John McCook) appears near his desired goal. He wants Quinn Fuller (Rena Sofer) back without the Quarter attachment he condoned.

Katie’s empty-nest feelings, with Will Spencer (Finnegan George) voluntarily moving to boarding school, should create an opportunity for Bill. But the Batie trust issue must be addressed first.

The Bold And The Beautiful (B&B) Spoilers: Eric Reverses Course, Makes A Heartbreaking Demand Of Quinn

Quinn enjoyed being with Carter Walton (Lawrence Saint-Victor). But the price both people have been paying for the public’s knowledge of that coupling is enormous.

Eric is outraged that Ridge and Brooke have been badgering him, Quinn, and Carter. However, the pressure is creating an effect. No one can deny that Eric, Quinn, and Carter reconsidered their ill-advised and foolishly pursued triangular arrangement because of Bridge’s fierce response and Katie’s compassionate conversations with Eric.

The result appears to create a Queric reunion. How long that lasts is fully debatable.

Katie told Bill on many occasions that she loves him. Tom’s character also knows that he loves her. But Bill’s erratic behavior is still the main impediment to a reunion.

Last summer’s incredible cover-up of the Vincent Walker (Joe LoCicero) hit-and-run was the latest piece of evidence. Bill can not control himself for extended amounts of time. He also is prone to put himself and his loved ones at risk for irrational reasons.

So, why would Katie choose to reunite with someone so unstable? Well, love is not logical on B&B or the other side of the screen. But there are limits that some people force themselves to accept.

The Bold And The Beautiful Spoilers – Predicting Queric And Batie

Queric seems too shaky to endure indefinitely. Donna Logan (Jennifer Gareis) was written back into the show to push the Deric angle. Fans of that couple are keeping their fingers crossed that Eric comes to his senses and realizes that Quinn is not the portrait on the wall.

As for Bill, no one can ever count him out. Katie is vulnerable and living alone. Fans of good soap could hope for a Batie reunion.

Tom’s character may be the only woman on the planet who can bring out the good side in Bill, even if he is never able to fully reform. Of course, it is fair to ask if Katie and fans of Diamont’s great alter ego want him to become a good guy?

The potential of Eric and Katie connecting romantically can not be dismissed. While that seemed unlikely just weeks ago, savvy viewers know that the volume of meetings they’ve had at the mansion suggests what would be a very controversial Keric possibility.