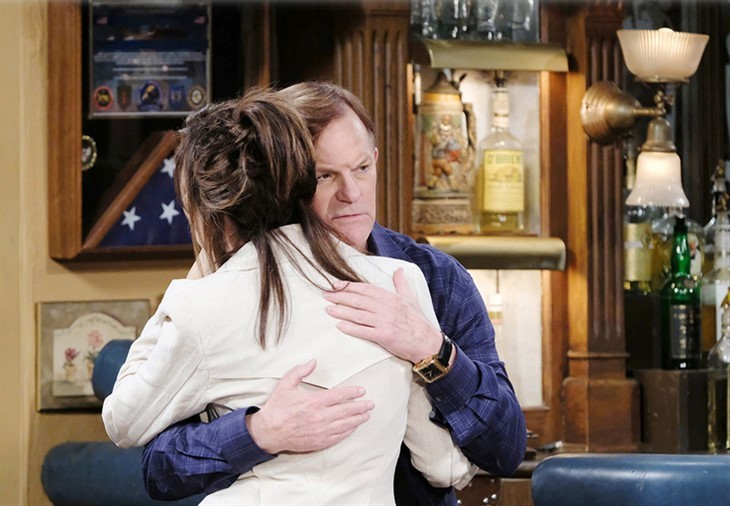 Days of Our Lives spoilers tease that Kate Roberts DiMera (Lauren Koslow) and Roman Brady (Josh Taylor) will give love another try in upcoming episodes of Days of Our Lives!

Days of Our Lives viewers will recall that a couple of years ago after the time jump, when Kate was living in the apartment over Brady’s Pub and was working as a waitress for Roman, he wanted to reconcile, citing he never forgot about Kate. That makes a lot of sense, considering he hasn’t had a girlfriend since their divorce! Kate, on the other hand has been married at least twice and involved with at least two men since her divorce from Roman! Kate moved on and on and on!

A few months after her relationship with Jake DiMera (Brandon Barash) ended in disaster, mostly due to the machinations of Kristen DiMera (Stacy Haiduk), Kate has a change of heart about Roman. Days of Our Lives viewers can understand why Kate might decide to try again with Roman, after so many relationships she was in seriously went south! Roman is safe – Roman is stable – and he is still her close friend.

Days of Our Lives viewers can understand why Kate might want to try with someone familiar and who didn’t hurt her badly. Kate comes by Brady’s Pub to talk to her sons Philip Kiriakis (Jay Kenneth Johnson) and Lucas Horton (Bryan Datillo). She’s a little worried when Roman doesn’t pay as much attention to her as usual-and it kind of has the effect of wondering if her hesitations have lost her Roman! He’s a little brusque, maybe even a little cold, and she’s a bit upset. It hits her that she lost a really good thing if she’s lost Roman, and she decides she wants to give love a try with him again.

Days Of Our Lives Spoilers – Will Roman Brady Give Kate Roberts DiMera Another Chance?

Days of Our Lives viewers will see Kate talk to Roman, likely immediately after her conversation with her sons. Roman’s brusqueness and apparent coldness scared her that she’s lost any chance with him, so she’ll want to talk things out and ask if she offended him in some way. Roman is not someone she wants to lose, and Kate likely realizes that perhaps she’s taken even their friendship for granted!

Days of Our Lives viewers know that Roman has had a lot on his mind lately, and that’s probably distraction she’s reading as coldness. Roman may be surprised, but he will be pleasantly surprised when he finds out Kate wants to try love again with him, and asks him about getting back in that lane they were once in!