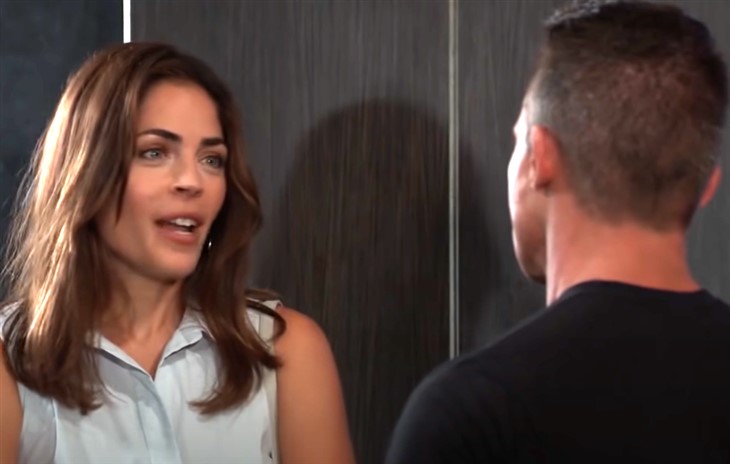 General Hospital (GH) spoilers and update tease Brason fans have been wondering what would have to happen to get Britt to give Jason another chance. On Wednesday Scott gave her the opportunity and she strongly protested. GH viewers, however, believe she will give in, and eventually, the duo will reunite.

Britt Westbourne (Kelly Thiebaud) has been pretty angry because Jason Morgan (Steve Burton) dumped her for Carly Corinthos (Laura Wright). She has been prideful and telling everyone that she will not accept second place. Carly asked Britt if Jason wasn’t worth another chance and Britt said no but Scott Baldwin (Kin Shriner) made her an offer that she may not be able to refuse. Dr. Westbourne might have to swallow her pride and ask for help or risk a big fall.

Scott is so desperate to find Liesl Obrecht (Kathleen Gati) that he told Britt it was time to call in a mercenary, someone who is not expensive and is Stone Cold. Britt was stunned and kept saying “No” and Scott replied each tiime with a strong “Yes” each time. He does not care for Jason but he loves Obrecht enough to do everything he can to help her.

General Hospital Spoilers – Britt Might Have To Eat Her Words

Jason has offered several times to assist Britt in the search for her mother but Dr. Westbourne refused. She said that she did not need a hero but might have to change her mind. Britt is as desperate as Scott to find her mother and knows there has been no progress in locating her. Scott pointed out that Anna Devane (Finola Hughes) will not make Liesl a priority and Britt knows this is true.

Team Brason fans were shocked when Jason and Carly decided to get married and Britt was kicked to the curb and her heart was broken. When Jason and Carly kissed and later decided to consummate their union this brought cries of borderline incest from those who were not in agreement. Britt will ask for Jason’s help and he will deliver.

This may cause her to soften towards him and Obrecht and Scott will also have a change of heart. This is why Britt and Jason fans remain hopeful she will forgive him and they can have a new beginning.

Keep up on everything happening with GH right now. Come back here often for General Hospital spoilers, news, and updates.