The Bold And The Beautiful (B&B) Spoilers: Carter Asks Quinn To Run Away With Him, Will She? 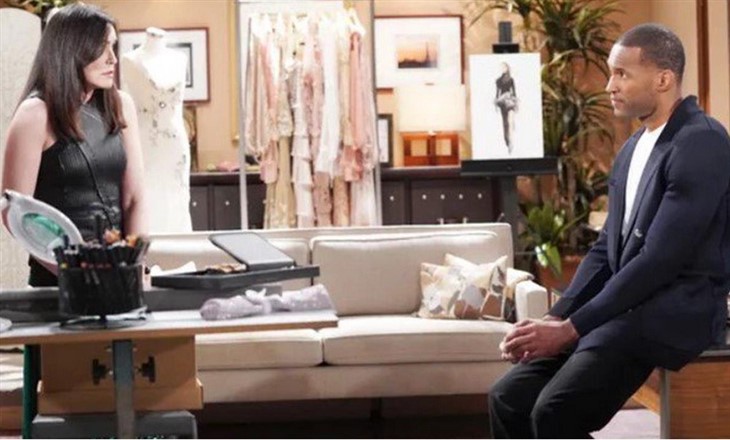 The Bold And The Beautiful (B&B) spoilers indicate that Carter Walton (Lawrence Saint-Victor) will ask Quinn Forrester (Rena Sofer) to run away when him when Eric tells her to break things off. Will Quinn stay with her husband, Eric Forrester (John McCook), or run off with Carter?

Carter and Quinn’s affair has been exposed not once but twice. Eric gave Quinn permission to continue her affair with Carter after he confessed that his ED issues are why he could not make love to his wife. Unfortunately, Ridge Forrester (Thorsten Kaye) found out about the affair and exposed Quinn and Carter again.

However, Ridge also embarrassed his father by exposing his ED to the entire family and others as well. Eric’s medical issues are quickly becoming common knowledge to the entire Logan family as well as his own. Suddenly Eric has changed his mind and wants Quinn to break it off with Carter. Will Quinn end things or break Eric’s heart by leaving him?

The Bold And The Beautiful’s Carter fell in love with Quinn when they had their first affair. Now that the two of them have been allowed to continue to sleep together, Carter’s feelings have only grown more intense. Carter doesn’t want anything to stand in the way of his love for Quinn. Carter wants to be able to openly express his feelings without worrying about what other people think. Carter has no idea that Quinn has come to him to break things off. Will Quinn give Carter what he wants or stay with Eric instead?

B&B Spoilers – Carter Walton Knows That No One Is Happy

The Bold And The Beautiful’s Carter will point out to Quinn that no one is happy the way things are. Eric isn’t happy because he cannot please his wife and he is allowing her to have an affair. Quinn isn’t happy cheating on her husband even though he condones it. Carter isn’t happy having sex with a married woman and being treated like he’s being used for a stud service instead of a COO. Carter wants to be happy again and he can do that with Quinn. However, Carter doesn’t realize that Quinn is about to break his heart once again by breaking off their relationship. Will Quinn go through with it or skip town with Carter?

Quinn breaking things off could send Carter into a downward spiral. Will Quinn break things off with Carter? Will Carter vow to get revenge if he can’t have the woman he loves?