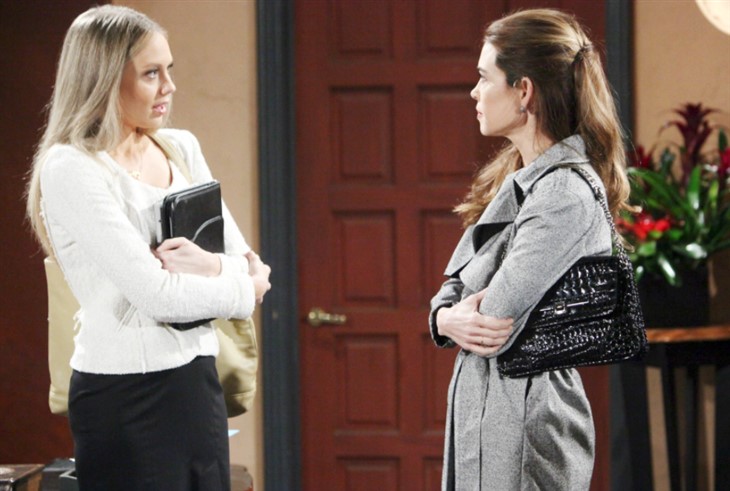 The Young and The Restless (Y&R) spoilers and updates tease bad news is coming related to Chance and tragedy could strike Ashland from several directions. If the worst happens the Newman sisters could end up grieving their spouses together.

Y&R spoilers say that Christine Williams (Laura Lee Bell) will soon be the bearer of bad news to Abby Newman Chancellor (Melissa Ordway). She will bring an update on Chance Chancellor (Donny Boaz) who missed the entire pregnancy of surrogate Mariah Copeland (Camryn Grimes). Chance also was not available for the birth of his son at the end of August and has now not been a part of the first two months of Dominic Abbott Newman Chancellor’s life. Y&R execs have said they won’t recast Chance so Christine might show up to tell Abby her husband is missing or deceased.

Earlier spoiler alerts indicated that Ashland Locke (Richard Burgi)) would be gone before fall and Victoria Newman Locke (Amelia Heinle) would end up alone and brokenhearted. Now that they are husband and wife there is the possibility that Ashland’s chemo will stop working and he will die because of cancer. Some Y&R fans still do not believe he is terminally ill and at some point, this will have to be addressed one way or another. If cancer does not take Ashland’s life there is a chance he could be murdered.

Jesse Gaines (Jamison Jones) had been satisfied with his arrangement with Ashland for decades but things changed when he found out Locke is allegedly dying of cancer. He attempted to blackmail Ashland to get more money before he passes away. Gaines is now infuriated with his benefactor and has given Billy Abbott a video of Victoria’s husband confessing to his crimes. The Newman’s have Jesse on ice but once he is free he could be so furious that he murders Ashland.

Y&R Spoilers – The Newman Joy Could Turn To Tragedy

Victor Newman (Eric Braeden) has watched both of his daughters enjoy milestones in less than one year. Abby married Chance on New Year’s Eve and welcomed their son in August and Victoria just married Ashland. If his sons-in-law die then Victor must deal with both daughters being widowed and the joy of the happy events could quickly turn to tragedy.