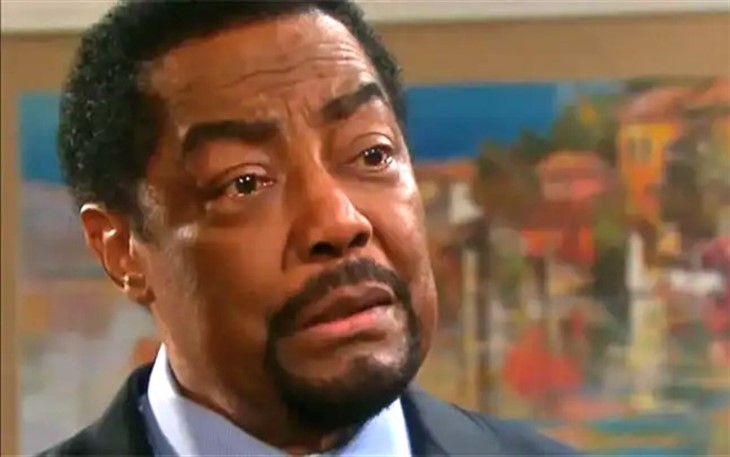 Days of Our Lives (DOOL) spoilers for the week of October 25 reveal that Abe Carver (James Reynolds) will be fighting for his life. The mayor is rushed to the hospital after Carmine (Richard Stevens) frames Jake DiMera (Brandon Barash). Jake is arrested while Abe’s loved ones remember his many years in Salem. So, is Reynolds leaving the NBC soap?

DOOL spoilers reveal that Ava Vitali (Tamara Braun) has agreed to help Philip Kiriakis (Jay Kenneth Johnson). Jake has warned Philip that nothing good can come from this alliance. Jake also reminded Philip that he nearly lost his life due to his previous association with the mob princess. In fact, Brady Black (Eric Martsolf) ended up nearly losing his life when the mob mistook him for Philip.

Philip isn’t thinking about how this could all go wrong, though. Philip is only interested in winning. Right now, he has intel about Jake that he is using to coerce Gabi Hernandez (Camila Banus). When Gabi refuses to sign over her company, Ava calls in a favor.

Abe will be out in the park when he suddenly falls to the ground. The sneak peek photos don’t show exactly what Carmine does to Abe. However, since Jake is arrested and not Carmine, we are assuming it must be something that happens from afar… such as a bullet.

Abe will be rushed to the hospital and is in critical condition. Since he remains in the hospital during the week of October 25, then it must be serious. It’s possible that Abe might even be in a coma.

Days of Our Lives spoilers reveal that Jake tries to help Abe and might even be the one that calls for an ambulance. So, why would Jake be arrested? Either Carmine pretends he’s an innocent bystander who witnessed the crime, or Abe mistakenly identifies Jake instead of the real shooter.

Even though Ava will have an alibi during the time of the attack, her name is written all over this. So, when Rafe Hernandez (Galen Gering) questions Jake and he brings up Ava, the commissioner will be perplexed.

Usually when a good character is killed off, there will be a tribute episode or special remembrance scenes. It is confirmed that during the week of October 25, Abe’s loved ones all remember his many years in Salem. That sounds like a tribute episode to us, but we don’t think Abe is leaving the NBC soap.

Abe has a story that’s developing right now involving Paulina Price (Jackée Harry), Chanel Dupree (Raven Bowens) and Lani Price Grant (Sal Stowers). Abe has gone through so much heartache and loneliness that he needs a happy ending. Let’s hope that he gets one and isn’t killed off.