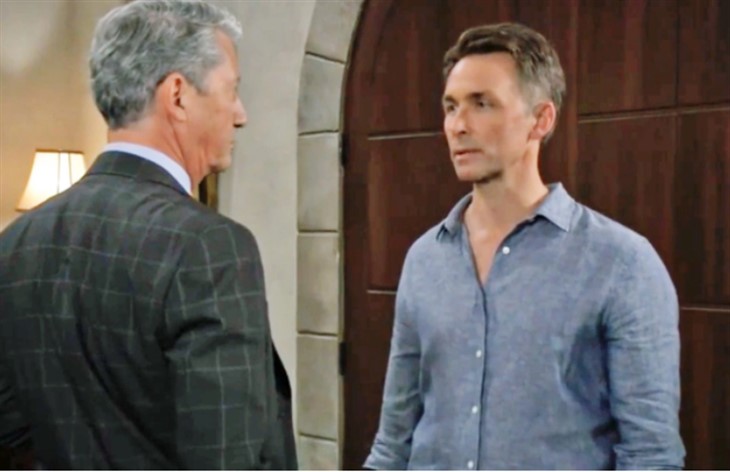 General Hospital (GH) spoilers tease that Victor Cassadine (Charles Shaughnessy) stunned Valentin Cassadine (James Patrick Stuart) with the news that he was Valentin’s actual father. Although he didn’t believe Victor’s claims at first, he will likely slowly come to believe Victor. But will that be enough to ensure Valentin’s loyalty to Victor? Or will Brook Lynn’s lie be the tipping point?

General Hospital Spoilers – Anna Devane May Be The Key!

Valentin’s love for Anna DeVane (Finola Hughes) as well as the love of his daughter have kept Valentin on the straight and narrow in recent months. Not wanting his little girl to become like him, Valentin vowed to become a better man. This was even more solidified when Brook Lynn Quartermaine (Amanda Setton) revealed that she was pregnant with Valentin’s baby. Ever since, Valentin has made it his goal to protect his children as well as bring Peter August (Wes Ramsey) to justice. Unfortunately, Brook Lynn was lying.

Brook Lynn was never pregnant with Valentin’s baby? She told the lie as part of an elaborate ruse in order to get Valentin to give her back her shares of ELQ. But Valentin wanted to wait until the baby was born. Meanwhile, Maxie Jones (Kirsten Storm) needed to find a way to keep her own baby away from its father, Peter. So Brook Lynn and Maxie made a deal. Brook Lynn would take Maxie’s baby and raise it as hers and Valentin’s. So for the last several months, Valentin has been bonding with a baby that isn’t his.

When the truth comes out, Valentin will feel betrayed. With only his love for Anna holding him back, he may come to side with Victor. Victor’s ultimate goals in Port Charles are unknown. He wanted to be able to control Drew Cain (Cameron Mathison) as his assassin. He has also made it clear that he is still in love with Dr. Leisl O’Brecht (Kathleen Gati). But other than that, Victors endgame is still a mystery. But he may have a brand new ally in Valentin, if Anna can’t pull him out of his feelings of betrayal!

Will Valentin believe that Victor is his father? Will he side with or against his newfound daddy? And how will Anna figure into all of this? Anything can happen in Port Charles, so stay tuned to General Hospital airing weekdays on ABC. And don’t forget to check back right here regularly for all your General Hospital news, information and spoilers!