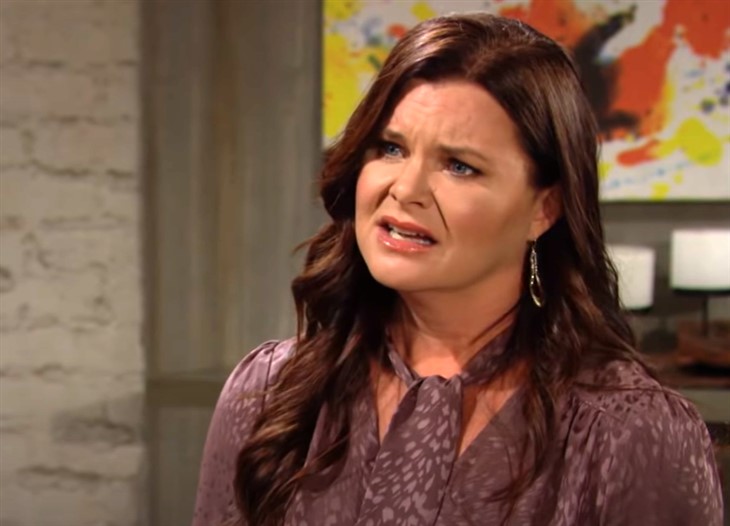 The Bold and The Beautiful (B&B) spoilers and updates reveal after confiding to Carter that she does not want to reconcile with her estranged spouse Katie might lean on him a bit more. Things might even become romantic between the two.

Katie Logan Spencer is one of the B&B characters that the writers don’t seem to know what to do with. During the past year, she has mostly been a listening ear for her sisters Donna Logan (Jennifer Gareis) and Brooke Logan (Katherine Kelly Lang).

Katie has also been a good friend to Eric Forrester (John McCook). She occasionally will ponder whether or not to reunite with Dollar Bill Spencer (Don Diamont) but cannot seem to make up her mind. Spoilers say this week she will be leaning towards leaving Bill behind and will share it with Carter Walton (Lawrence Saint-Victor)

The Bold And The Beautiful (B&B) Spoilers: Carter Asks Quinn To Run Away With Him, Will She?

Spoilers teased last week that Carter might turn to Shauna Fulton (Denise Richards) once Quinn Fuller (Rena Sofer) broke up with him. Spoilers also suggested that Brooke might try to push Katie and Eric together. Now it is being suggested that Katie and Carter might hook up after she confides in him that she is done with Bill. Katie and Carter have never been close so it’s not clear why she would turn to him now.

The Bold And The Beautiful Spoilers – Dollar Bill Will Be Furious

Dollar Bill does not like to lose and the last time he checked in he still desired to reconcile with his wife. Whether or not she hooks-up with Carter, Katie must still deal with the wrath of Bill Spencer who will pull out all the stops to win her back. Bill has not been around since shortly after his altercation with Justin Barber. When he finds out that Katie wants to start fresh without him Bill will be furious. If she does hook-up with Carter this will really make him angry.

The Bold And The Beautiful Spoilers: Will Carter And Quinn Run Away Together?https://t.co/jpIb546wAl

B&B needs to bring Katie and Bill back to the screen so they can finalize their situation one way or another. Perhaps this will be the time when Katie breaks the cycle of going back to Bill and finds a new love. It could be Eric, Carter or perhaps someone new or she might even decide to just be alone for a while.