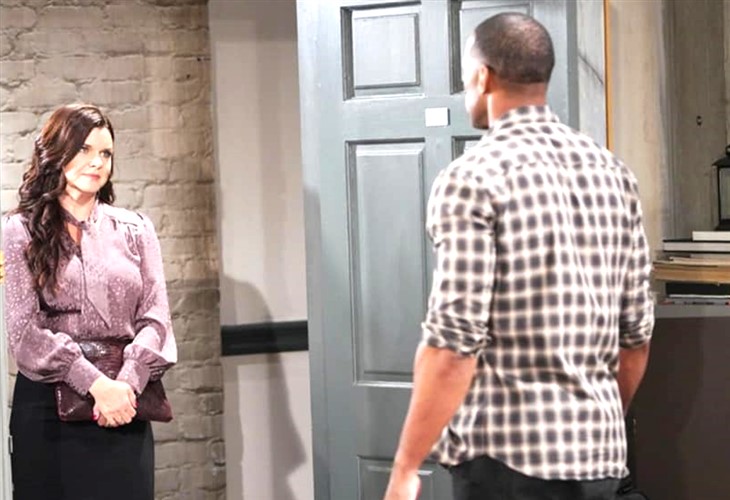 The Bold and the Beautiful (B&B) spoilers and updates tease Carter Walton (Lawrence Saint-Victor) has lost his love again. Carter had thought that he was going to have a future with Quinn Forrester (Rena Sofer) but now he knows that will not happen. Carter expressed his frustrations over losing Quinn to Katie Logan (Heather Tom). Katie is having trouble deciding what she wants to do about her unpredictable relationship with Bill Spencer (Don Diamont). Katie told Carter that she does not know if she wants to go back to Bill.

They were shocked when they found out that Eric did not want a divorce and that he had erectile dysfunction. Eric encouraged Quinn and Carter to continue their relationship because he was impotent. Ridge Forrester (Thorsten Kaye) and his wife Brooke Logan Forrester (Katherine Kelly Lang) with the help of Justin Barber (Aaron D. Spears) uncovered the truth which led to Quinn deciding to stay with Eric. Carter is heartbroken over losing Quinn because he was willing to run away with her. Carter wants to find a love that wants to be with him and not someone else.

Katie still loves Bill but has not been able to stay with him. Katie wants to be with Bill but he keeps finding ways to let Katie down. Katie has been upset with the way that Bill handled the death of Vincent Walker (Joe LoCicero). She did not like that he had covered up the way that Vinny died or that he and his son Liam Spencer (Scott Clifton) almost went to jail because of the cover up. Katie did not know if she was going to be able to help her son Will Spencer (Finnegan George) to deal with the fact that Bill may have gone to jail for years. Katie wants to have a relationship with someone who she can count on. Katie knows that Bill will continue to find ways to disappoint her even though he loves her. Katie wants to find someone who she can count on to put her needs first and take care of her and Will.