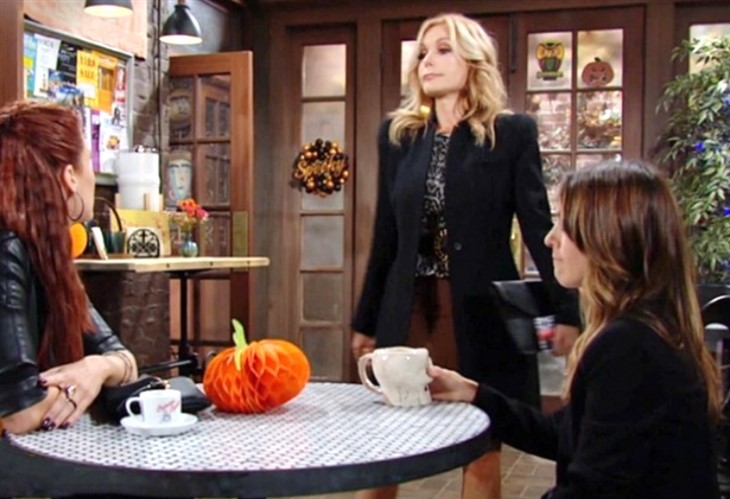 The Young and The Restless (Y&R) spoilers tease Lauren will give Sally a piece of her mind and leave the designer rattled. She then jumps on her sister-in-law a second time and demands that she cuts Sally loose. Chloe is in the middle of this feud and does not see a way to make amends.

The Young And The Restless Spoilers -Lauren Fenmore Is Furious

Lauren Fenmore (Tracey E Bregman) was furious after listening to Chloe Mitchell (Elizabeth Hendrickson) explain how Victoria Newman (Amelia Heinle) ended up wearing Sally Spectra’s (Courtney Hope) wedding gown instead of the one by Fenmore’s designer. She felt humiliated that she was kept in the dark on what was going on. She let her fury loose on Chloe right in front of Kevin Fisher (Greg Rikaart) and Michael Baldwin (Christian LeBlanc) who seemed stunned. On Thursday, as Chloe was trying to prepare Sally for the wrath of her sister-in-law, Lauren showed up and unleashed her fury on Ms. Spectra.

The Young And The Restless (Y&R) Spoilers: Tuscany’s Biggest Winners And Losers

Lauren let Sally know how angry she was and the redhead was pretty rattled. Sally later told Adam she did not like disappointing those whose opinions mattered to her. Sally believes the end justifies the means without considering that people can get hurt along the way. Chloe has been collateral damage in this situation and will continue paying a high price. Although Sally has experienced some regret she really has not learned her lesson and has caused a rift in Chloe’s family.

Lauren later tells Chloe that she feels betrayed by her and warns that Sally will eventually betray Chloe. She begged her sister-in-law to cut ties with Sally before it is too late. Chloe knows Lauren is right because Sally has made enemies of many people in Genoa City. She probably will not listen to the wise counsel, and at some point, she will also be a victim of the redhead.

The Young And The Restless Spoilers: Sally Breaks Up Phyllis & Nick – Jack Waiting in the Wingshttps://t.co/lBAjavx75g

Lauren wants Sally to pay for switching the wedding dresses and embarrassing her. She is furious because this is the second time that Ms. Spectra has caused her problems for Fenmore’s. Chloe is caught in the middle and if she does not cut ties with Sally she will alienate Kevin and Michael as well as lose Lauren’s respect. Michael and Kevin agree with Lauren so Chloe will have no one in her corner.