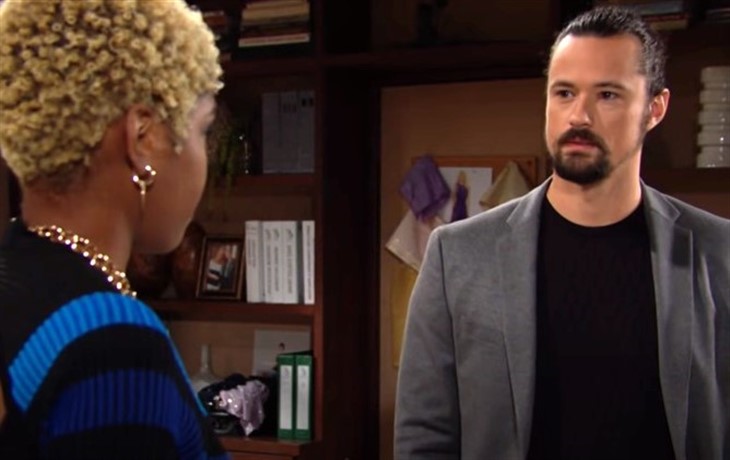 The Bold and the Beautiful (B&B) spoilers show Thomas has been a model citizen for months and fans are hoping the change is on the level. His recent actions related to Ms. Buckingham could be an indication, that he is up to his old tricks again.

Thomas Forrester these days. He seems to have gotten over his obsession with Hope Logan (Anika Noelle) and is now smitten with Paris Buckingham (Diamond White). Thomas knows that his cousin Zende Forrester (Delon de Metz) is dating Paris but he is making moves to get her into his orbit. B&B viewers are trying to decide whether or not Thomas is sincere or repeating past behaviors.

The Bold And The Beautiful Spoilers: Sheila’s Plan Is Ominous – All Hail Kimberlin Brown And Sean Kanan

B&B Spoilers – Paris Buckingham Could Be Getting Scammed

Paris decided to sublease the apartment where Thomas had been living because he was supposed to be closing on a house. As soon as she signed the agreement, Thomas received a phone call. He said it was the homeowner and that his deal fell through. B&B viewers are wondering if Thomas was telling the truth or reverting to his former sneaky ways. Brooke Logan (Katherine Kelly Lang) has always insisted she does not believe Thomas has really changed, and perhaps she is correct. He could be scamming Paris so they will end up roommates and possibly lovers.

The B&B writers don’t seem to know the direction they want to take Paris and have her all over the place. She has been flirting with Zende for months but their relationship has not yet gone to the next level. She moved in with Steffy Forrester (Jacqueline MacInnes Wood) and began having fantasies about her husband John Finnegan (Tanner Novlan). Now she seems to be enamored of Thomas even though she knows how he treated her sister Zoe Buckingham (Kiara Barnes).

B&B Spoilers: Paris And Zende Take Things To The Next Levelhttps://t.co/gFelAtcVUy

B&B Spoilers – The Odds Are Against Them

If Thomas and Paris end up sharing his apartment, he will pour on the charm and try to win her over. The odds are not in their favor as Thomas’s motives are unclear. Does he sincerely care for Ms. Buckingham, trying to make Hope jealous or simply enjoying competing against his cousin Zende? There is always a chance that Zoe and the man her sister almost married could fall in love and be happy together for quite some time.