The Bold And The Beautiful (B&B) Spoilers: Quinn Tells Shauna Her Secrets And Desires 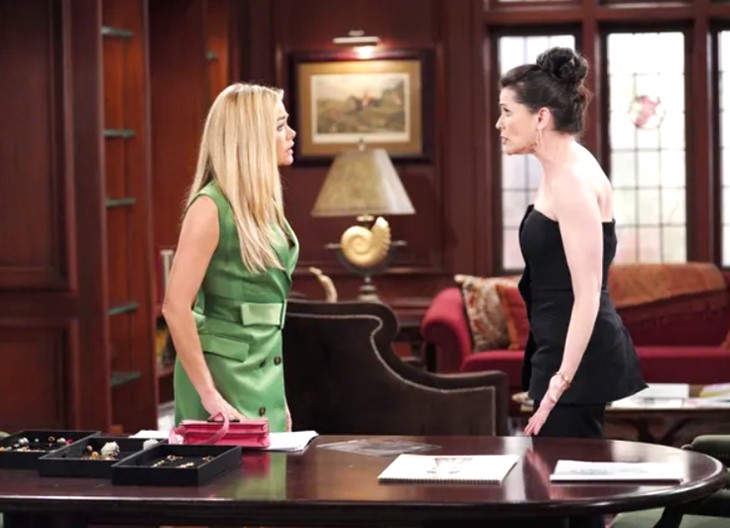 Viewers of The Bold and The Beautiful will recall that Quinn was in a vulnerable place and experiencing a time of weakness when she fell into the affair with Carter Walton (Lawrence Saint Victor) several months ago on The Bold and The Beautiful. She actually had gone to Carter to intercede for a devastated Zoe Buckingham (Kiara Barnes) who had made the mistake of trying to have a last moment fling with Zende Dominguez (Delon de Metz) the night before her ill-fated wedding to Carter!

It got back to Carter and he would not take her back – and they broke up with her leaving the country to work in an overseas office. But Quinn, who had not received husbandly attention from Eric Forrester (John McCook) in spite of his taking her back, fell into Carter’s arms and the whole sordid affair started out as grief sex! Now, months later, after Carter and she falling in love and then breaking up after Eric had told him to “satisfy” Quinn in his place because of his ED, tells Shauna she wishes the whole sordid affair had never happened!

Viewers of The Bold and The Beautiful will recall that in spite of everything, Quinn wants to remain Mrs. Eric Forrester and she wants their marriage to work out! Errors of judgment and impatience dogged Quinn throughout this whole time period, and Quinn tells Shauna if only Eric had told her of his physical problems she thinks she would not have felt so neglected. After all, as most viewers of The Bold and The Beautiful know, there are other ways besides the usual way for couples to achieve sexual satisfaction without straying to other partners. Quinn is clear that she’s not blaming Eric – after all, for most men admitting to such a malady can be difficult.

The Bold And The Beautiful Spoilers – Quinn Forrester Admits A Secret

Viewers of The Bold and The Beautiful will see Quinn admit that she thought Eric was punishing her after taking her back even though he told her he had forgiven her. The buildup to their breakup had been long, and Eric’s worst problem with Quinn all along had been her deceit and her manipulations. Viewers of The Bold and The Beautiful will recall that Quinn had manipulated Ridge Forrester (Thorsten Kaye) to have a drunken Las Vegas wedding night with Shauna, which, thankfully, was never consummated.

The Bold And The Beautiful Spoilers: Hope Worries About The Future https://t.co/hWuJD6J1bC #BoldTheBeautiful #Spoilers #BB pic.twitter.com/SWoZjPNRv0

But when Quinn put a video from Shauna’s cell phone of Brooke Forrester (Katherine Kelly Lang) and Bill Spencer (Don Diamont) making out in front of a window on a digital photo frame which was running at Ridge and Brooke’s reunion party, it caused untold problems! Not only did Ridge and Brooke break up, but so did Bill and Katie Logan Spencer (Heather Tom)! Katie has still not been able to forgive or to trust Bill. Quinn just wishes she could go back in time and take it all back!