Days Of Our Lives (DOOL) Spoilers: Ava All Mobbed Up, Wants Carmine’s Blood 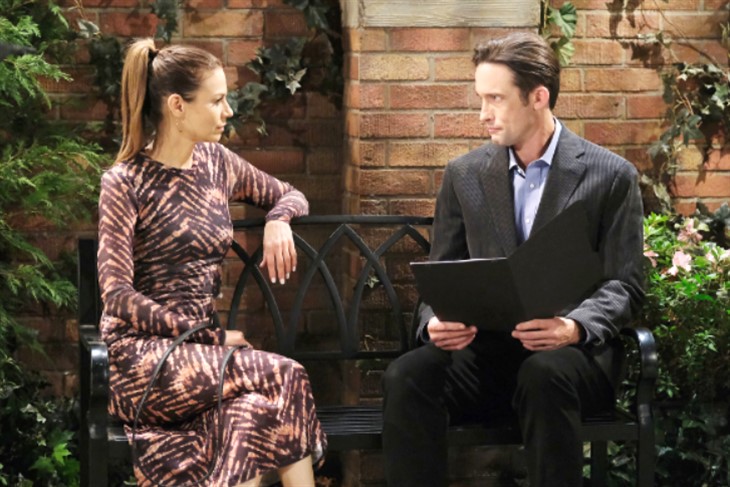 Days of Our Lives (DOOL) spoilers tease that Ava Vitali’s (Tamara Braun) all mobbed up again, as she’s out for blood from Carmine Merlino (Richie Stephens) in an upcoming episode of Days of Our Lives!

Days of Our Lives viewers will recall that even though Ava has been working hard to clean up her life and distance herself from the mob, recently she’s been doing some mob-like things. Days of Our Lives viewers remember that her son Tripp Johnson (Lucas Adams) was a big part of her decision to clean herself up, wanting to have a real mother-son relationship with him.

Her love relationship with Salem Police Commissioner Rafe Hernandez (Galen Gering) has been another carrot keeping her eyes straight ahead in the race, but then Philip Kiriakis (Jay Kenneth Johnson) reached out for her help! Ava thinks she can keep her secret mob help of Philip secret, but it may not be so easy – especially since Carmine showed up in town and shot Abe Carver (James Reynolds) after wrestling Jake DiMera’s (Brandon Barash) gun away from him!

Days of Our Lives viewers will recall that it was Ava who put Philip in touch with Carmine in the first place, or at least gave him the information to act on himself. She’d called her cousin Angelo Vitali (Angelo Tiffe) who dug up some dirt on Jake back in Philly, which she passed on to Philip. Days of Our Lives viewers will recall that Ava’s been having problems with Rafe’s sister Gabi Hernandez (Camila Banus) and Philip had been having problems with both Gabi and Jake.

Philip took it upon himself to travel to Philadelphia and get Carmine’s side of the story regarding the beat down and murder of one Jed Zanetti (mentioned character). Carmine, of course, provided a false narrative, blaming Jake with what he himself did. Jake had some explaining to do to Gabi afterwards. Days of Our Lives viewers will remember that Jake then reached out to Carmine after digging out his old gun, intending to confront Carmine for making him good for the murder, and had threatened to shoot him if he didn’t comply! He wanted Carmine to tell the truth and clear him but instead Abe got in the wrong place at the wrong time, and of course Jake was arrested for Abe’s shooting!

During the week of October 25-29, Days of Our Lives viewers will see Ava and Philip have an important meeting. They will need to figure out where to go from there, because Carmine made a huge mess and Ava will decide he’s more trouble than he’s worth. Days of Our Lives viewers know that if Carmine turned on Jake, he could turn on Ava and Philip and expose some things from their own pasts that could cause them a lot of trouble! This may mean that Ava will again turn to her mobbed up ways and put a hit out on Carmine – he’s trouble they don’t need.

As for Jake, Abe is expected to survive despite a very close call and a near-death experience, but he may remember enough to clear him from being the shooter even though he came into the situation seeing the two struggle over the gun! Carmine’s prints should be on the gun as well as Jake’s so that will corroborate Jake’s story even though he’s not totally innocent! Jake still won’t be able to prove he wasn’t going after Carmine himself and Ava’s part in the mess may come out in court and disappoint Tripp in his mom!