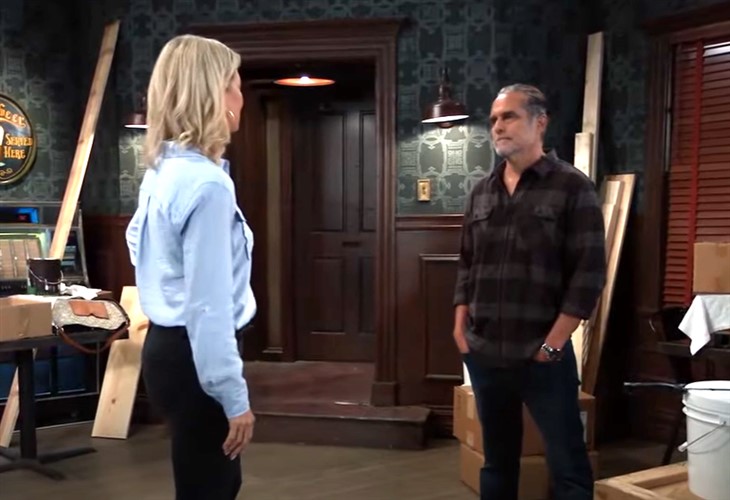 General Hospital (GH) spoilers tease that Sonny Corinthos (Maurice Bernard) still has feelings for Nina Reeves (Cynthia Watros). And thanks to Michael Corinthos (Chad Duell), all of Port Charles may find out as well. While Michael is understandably upset that Nina kept Sonny away from his family when he had amnesia, his need to make Nina pay may blow up in his face in more ways than one.

Not only could this move threaten his relationship with Willow Tait (Katelyn MacMullen) but he could end up destroying his mother and Sonny’s marriage in the process.

Michael contacted the Attorney General in Pennsylvania to let him know about what Nina did as well as give him a sizable donation for his campaign. That donation will make prosecuting Nina to the fullest extent of the law his top priority. But the charges he came up with, fraud and identity theft not only seem lackluster, but proving them may not be as easy as one might think. As viewers know, Nina asked Sonny several times if he wanted to discover his past and each time Sonny said a resounding “No!”

GH Spoilers – Will Sonny Corinthos Have To Take The Stand?

In order to provide Nina with the best defense, her lawyer Scott Baldwin (Kin Shriner) may suggest that they put Sonny on the stand. Nina won’t want to do that because she swore to Sonny that she wouldn’t tell Carly Corinthos (Laura Wright) about the romantic nature of their relationship while he had amnesia. But if the case goes poorly, Scott may convince Nina that it’s the only way to keep her from seeing jail time.

Michael would certainly have thought twice about having Nina arrested if he knew the whole story. When it comes out in court that Sonny not only didn’t want to find out who he was, but that he was happily involved in a romantic relationship with Nina, not only will Nina be found not guilty most likely, but Carly will find out just how close Nina and Sonny became. This bombshell has the potential to cause major problems in their marriage?

Will Nina actually have to have a day in court? Will Sonny have to testify? Will the fact that Sonny and Nina were romantically involved come out? Anything can happen in Port Charles so stay tuned to General Hospital airing weekdays on ABC. And don’t forget to check back right here regularly for all your General Hospital news, information and spoilers!