The Bold And The Beautiful (B&B) Spoilers: Sheila And Deacon Kiss 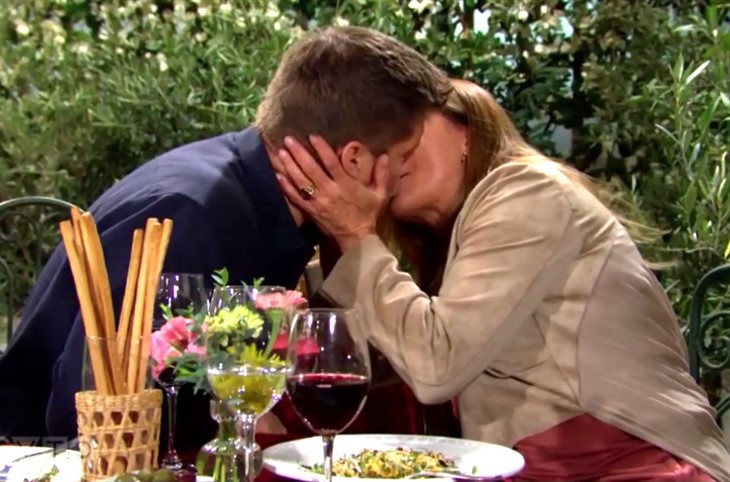 The Bold And The Beautiful (B&B) spoilers indicate that Sheila Carter (Kimberlin Brown) is stepping up her game when it comes to getting her son’s attention. Using Deacon Sharpe (Sean Kanan) and Hope Spencer (Annika Noelle) to do it is a bonus. Will Sheila’s plan work?

The Bold And The Beautiful Spoilers – Sheila Carter Sees An Opportunity

The Bold And The Beautiful’s Sheila sees a huge opportunity when Hope and John “Finn” Finnegan (Tanner Novlan) arrive at Il Giardino. Sheila and Deacon had been strategizing for some time before Hope and Finn arrived. Deacon was trying to back out of this arrangement until Sheila convinced him to go along with the kiss. Will it be enough to get their children talking to them? Both Finn and Hope have been forbidden to speak to their parents. However, this isn’t likely to work very well when they are faced with witnessing this kiss. Sheila is determined to get a response and she gets just that. Just as Sheila suspected, Hope arrived and questioned the kiss, quickly followed by Finn.

The Bold And The Beautiful’s Sheila’s plan seems to be working. Hope has approached Deacon and Finn has come to question her. Now, since Sheila and Deacon have spun their love story, Sheila hopes they will tell their significant others. Sheila believes that this will bring her and Deacon closer to their children. However, it seems that Sheila is off in her thinking. If Steffy Forrester (Jacqueline MacInnes Wood) and Liam Spencer (Scott Clifton) learn of Deacon and Sheila’s relationship, wouldn’t that make them more determined to keep their significant others away from them? After all, wouldn’t Deacon and Sheila be much more dangerous together than apart?

The Bold And The Beautiful’s Sheila says she doesn’t want revenge, she simply wants acceptance. However, is lying the best way to get that? Now one is going to believe that Sheila has changed when she keeps using manipulation to get what she wants. Has Sheila truly changed? Actions speak louder than words and Sheila’s actions so far show complete manipulation. Deacon isn’t helping his case either by aligning himself with Sheila of all people. Will Steffy and Liam give in and allow Finn and Hope to see their parents? Have Deacon and Sheila really changed despite their actions?

The Bold And The Beautiful Spoilers: Brooke Beats Quinn – Donna Pulls Eric Away from Wifehttps://t.co/QOuOFFnuWi

Steffy doesn’t trust Sheila and probably never will. Is there any hope for these two to join their family in the future? Will Sheila and Deacon ever get to be close to their children and grandchildren?