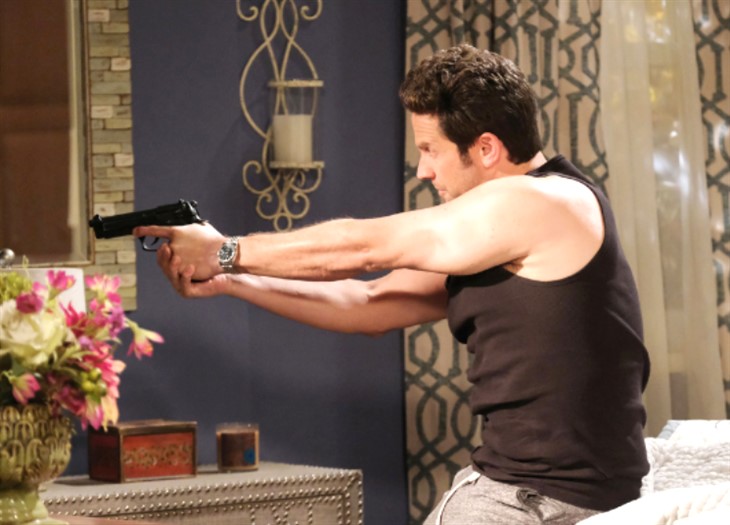 Days of Our Lives (DOOL) spoilers tease that Jake DiMera (Brandon Barash) is heading for jail. It will certainly appear to Salem PD that Jake shot Mayor Abe Carver (James Reynolds). Abe will likely survive but it won’t look good for awhile. So look for the cops to come down hard on Jake, even though he didn’t fire the shot. But he is the reason the guilty party, a Philadelphia mobster named Carmine Merlino (Richard Stevens), was in Salem. And it was Jake’s gun that shot Abe!

Although he was also in the mob in Philadelphia, he wasn’t a hitman like Ava Vitale (Tamara Braun) claims. The real killer was Carmine but Phillip Kiriakis (Jay Kenneth Johnson) paid Carmine to testify that Jake was the real killer. Jake summoned Carmine to Salem and pulled a gun on him. Carmine got the upper hard and took Jake’s gun. When Abe stumbled on to the scene, Carmine shot him. But Carmine took off and left Jake to deal with the authorities. Carmine will certainly make a beeline out of Salem.

Jake will certainly be arrested for both shooting Abe and the murder in Philadelphia. Carmine will certainly be a person of interest in the case, but it will be his word against Jake’s. And since Jake was at the scene of the crime, he will be the one to go down for it. And if Abe died, it will get even worse for Jake.

Days Of Our Lives Spoilers – Gabi Hernandez Will Have To Save Jake DiMera!

Gabi will have to pull out all the stops in order to save Jake. Although she will certainly try to convince her brother, Police Commissioner Rafe Hernandez (Galen Gering) of Jake’s innocence, Rafe will have to by the evidence. And unfortunately, unless Gabi can produce Carmine, the evidence all points to Jake! Let’s hope that Gabi can prove Jake’s innocence or Jake could be in big trouble! Phillip won’t likely lend a hand to help, so Gabi will be on her own.

Will Jake be arrested for Abe’s shooting? Will Gabi try to convince Rafe to let Jake go? And will Carmine eventually confess? Anything can happen in Salem, so stay tuned to Days of Our Lives airing weekdays on NBC. And don’t forget to check back right here regularly for all your Days of Our Lives news, information and spoilers!