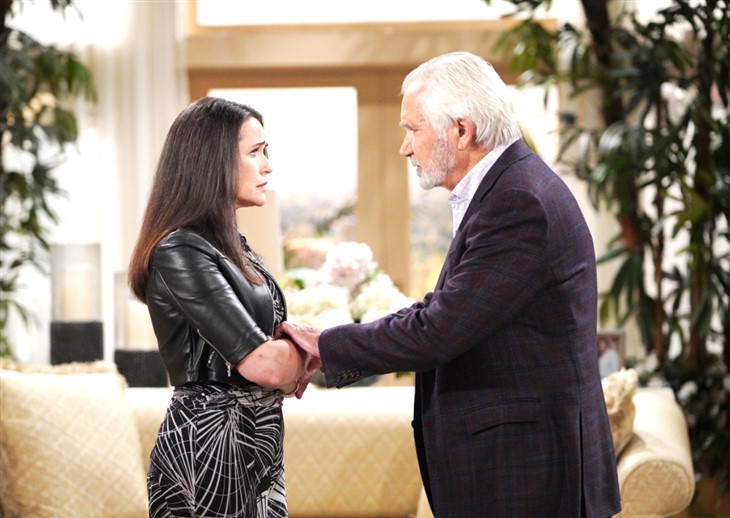 The Bold and the Beautiful (B&B) spoilers document that Eric Forrester (John McCook) finally had a breakthrough. As accompanied by joyful music, Eric’s dilemma appears to have reached a crescendo.

Devoted viewers recall the touchstone moment when Steffy Forrester (Jacqueline MacInnes Wood) laid eyes on John Finn Finnegan (Tanner Novlan). The moment was intended and presented as a magical wink to the future. The same appears to be true with Eric’s recognition of Donna.

The Bold And The Beautiful (B&B) Spoilers: Bill And Brooke Tempted Again

McCook has been working in a serious storyline. Eric’s ED issue is not funny on that side of the screen or the other. Now, it seems that the matter is resolving itself with his recognition of Donna’s enduring appeal.

B&B has handled the topic with respect and McCook is delivering some of his best performances in years. With those winning efforts comes the opportunity to end Queric, even though that couple just reunited.

Donna’s hidden interest has been teased as being revealed for months. Talks with her sisters, Brooke Logan Forrester (Katherine Kelly Lang) and Katie Logan (Heather Tom), were meaningful. Then, there was the collage of best life moments Donna created and the revealed, plastic honey bear bottle stash that affirmed who is Eric’s best match.

Quinn Fuller (Rena Sofer) decided to stand by her man. But she has done that after first coupling with Carter Walton (Lawrence Saint-Victor) and then going back to him with Eric’s mind-boggling approval.

The enabled triangle was unsustainable and lasted a mere matter of weeks. The creativity of this tale projects to allow Eric to reject Quinn, even though she did break from Carter and recommitted to her spouse.

There is no doubt that Quinn loves her husband. But at this stage of his life should he have to deal with her sporadic patterns of terrible and disruptive behavior? In one word, no.

The Bold And The Beautiful Spoilers: Quinn’s Choice – Eric Or Carter?https://t.co/rTA5mkFOp6

Donna is a delight. She is heartfelt, possesses a sweet personality, and is not Quinn.

The Forrester family would likely endorse the end of Queric and a revival of Deric. Hopefully, that daytime course is being pursued.

Eric deserves more than love. He needs trust and honesty to live a good life.