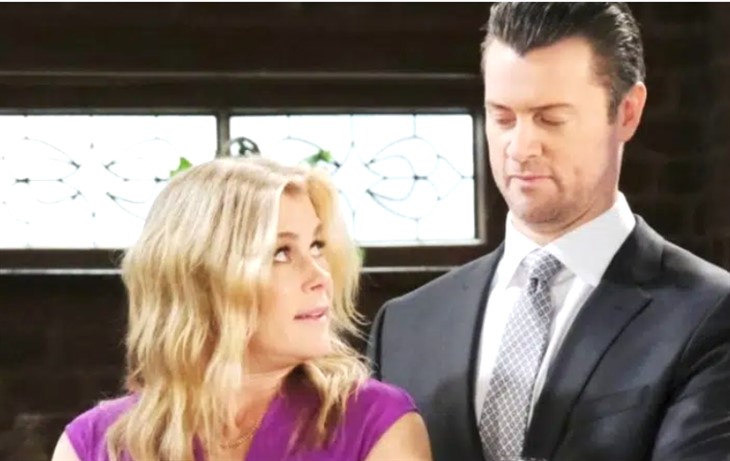 Days of Our Lives (DOOL) spoilers tease that Kristen DiMera (Stacey Haiduk) won’t let being a fugitive keep her from returning to Salem. Brady Black (Eric Martsolf) is in Salem and so is their daughter Rachel. But Kristen has much to answer for, possibly including the disappearance of Sami Brady (Alison Sweeney). Although everyone believes that Sami left town on her own, viewers will remember that someone abducted her right outside Rafe Hernandez’s (Galen Gering) house. But as of yet, no one realizes Sami is missing thanks to some texts from her phone.

Before Kristen had to hightail it out of town, she had discovered that Sami had slept with Lucas Roberts (Bryan Dattilo). Furious that Sami cheated on her brother, EJ DiMera (Dan Feuerriegel), Kristen first used the information to blackmail Sami and Lucas into helping her get Chloe Lane (Nadia Bjorlin) out of town. But when that failed, Kristen wrote a letter to EJ about Sami’s infidelity. Sami intercepted the letter but somehow EJ still ended up with it. He kicked Sami out of the DiMera mansion and everyone believed she left town. But did Kristen kidnap Sami to make sure she didn’t reconcile with EJ?

Although someone has been sending texts from Sami’s phone indicating that everything was just fine, it will soon become apparent that isn’t the case. Both Lucas and EJ will realize that something is wrong. EJ will certainly wonder if Kristen was responsible. And it wouldn’t be all that surprising if she did take Sami. After all, Kristen also kidnapped Dr. Sarah Horton (Linsey Godfrey) and had her shipped off to a deserted island, possibly Melaswen.

Regardless of whether she is responsible or not, look for Kristen to deny any involvement. She committed a litany of crimes and adding Sami’s kidnapping won’t do her any favors. EJ will eventually believe Kristen, but that still leave Sami missing. Kristen will encourage EJ to leave it alone, but deep down he still loves Sami and will want to save her, even if it means working with Lucas!

Will EJ believe Kristen kidnapped Sami? Is Kristen actually guilty? Is Sami will Sarah on a deserted island somewhere? Anything can happen in Salem, so stay tuned to Days of Our Lives airing weekdays on NBC. And don’t forget to check back right here regularly for all your Days of Our Lives news, information and spoilers!