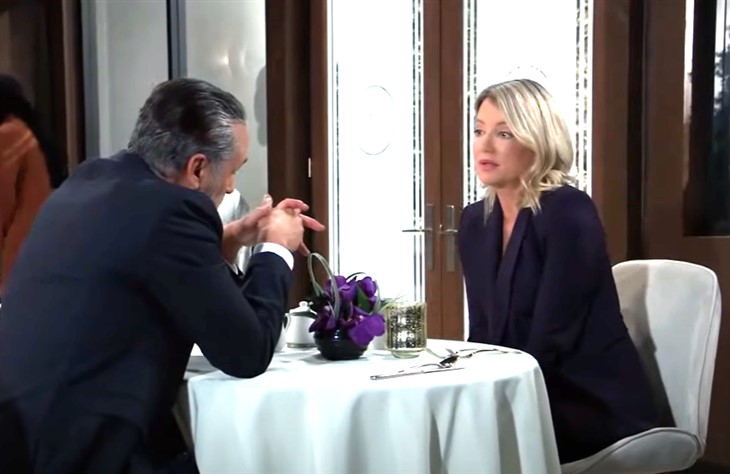 Mrs.Corinthos defends Michael’s decision to have Nina prosecuted but her husband does not agree. The mob boss may not realize it but Mike’s love for the woman he fell in love with while he was in Nixon Falls is coming to the surface.

Jason Morgan (Steve Burton) and Carly Corinthos (Laura Wright) came clean to Sonny Corinthos (Maurice Benard)about the fact they almost made love. The trio is attempting to move forward and Jarly wants to get back on track. Jason is in Greece with Britt Westbourne (Kelly Thiebaud) and Brason fans hope they will reunite.

None of them are aware that Mike is slowly emerging and will break Carly’s heart. Spoilers say Carly will be happy to find out that Michael had charges filed against Nina Reeves (Cynthia Watros) but her husband will not agree. Carly does not understand why Sonny has a soft spot for the woman who hid his identity but she will soon find out.

Sonny did not come clean about Mike falling in love with Nina but this truth will have to surface. The duo agreed to keep their romance private so that Carly will never find out Jasper Jax know the truth and spoilers tease that he might tell Michael. Carly’s son might decide she has a right to know or the facts could be relayed another way. It’s possible this might come out at the trial.

When Sonny and Carly debate Michael’s decision to have charges brought against Nina things could become intense. Carly may demand to know why her husband downplays the past nine months and now is defending Nina. Carly would be shocked to learn that Mike is still very much a part of Sonny and that he is still in love with Ms. Reeves. Sonny might decide that his wife needs to know the truth and blurt it out.

Ava Jerome (Maura West)and Phyllis Caufield (Joyce Guy) both can see that Mike is very much a part of Sonny’s life and both believe he still cares for Nina. Mike comes out each time Sonny and Nina are together and Carly has no idea. She will continue to push for answers but will not be able to handle what she hears.